It is a sad fact of life that infrastructure is no page turner. It is hard to sell stories detailing inevitably forgotten promises about civic renewal projects, largely because they’re full of lofty terminology and because they take years of continued investment to go anywhere.

We were all handed a lovely paper booklet with some photos and photoshopped “after shots” showing what the money could buy. This appeared to be wider footpaths, fewer parking spaces and bike racks and the Civic bus interchange moved to Barry Drive.

The key aims the Chief Minister focused on initially included increasing the residential population of Civic and the number of people catching public transport or riding/walking to work. But the plan intends to do this by maintaining “existing high levels of accessibility and functionality” and optimising “utilisation of existing transport”. (read, keeping things as they are)

When asked if the plan would be accompanied by additional investment in public transport, Mr Stanhope said:

One of the quite significant roads or public transport investments in this is to actually realign the bus route out of the central city area to Barry Drive through city west to the ANU precinct. So there will be a significant investment in enhancing the entering and exiting of the city.

But there is a separate detailed strategic plan the Government has developed in relation to that issue which will also require major investment by the Government.

The Sustainable Transport Plan has been ongoing since 2004 and the TAMS website states:

The 2009-10 Budget includes significant funds to support improvement of public transport, including demonstration funding for a new Redex bus service, similar to the existing Intertown, between Gungahlin, City, and Kingston. Other actions in the current budget include:

Assuming these aims have been met, the people of Canberra might look forward to the Government acting on these studies with the next Budget.

When questioned about the “tatty” state of Civic and what the Government was doing about it now, Stanhope pointed to the bowls of petunias a few times and then moved on to some vague promises:

The city is certainly in some areas showing its age and I must say that over this last year or two, I must say particularly through the efforts of CBD Ltd in partnership with the ACT Government, changes have occurred and I think there is a light, airy, happier feel to the city through the petunias that are now everywhere throughout the city. The flowers are wonderful and we are progressively getting to work on other parts of the city.

Anyone remember Douglas Adams’ writing in Hitchhiker’s Guide to the Galaxy about the bowl of petunias suddenly called into existence above an alien planet?

Curiously enough, the only thing that went through the mind of the bowl of petunias as it fell was Oh no, not again. Many people have speculated that if we knew exactly why the bowl of petunias had thought that we would know a lot more about the nature of the universe than we do now.

When standing at the launch of “Bonjour Canberra” today in front of a pair of glittering can-can dancers and a bunch of Paris Masterpieces posters, I was reminded of the importance of the petunias by CBD Ltd. CEO Linda Staite.

Yes Canberra, we have petunias.

How successful the Government’s Action Plan will be in helping them “develop priorities for investing in improvements to public transport, roads, footpaths, parks and cycleways” is yet to be determined, but if they can turn the priority development into actually doing something and get over the obsession with the petunias, there may be hope for Civic.

* According to our dear editor, Ian Meikle. 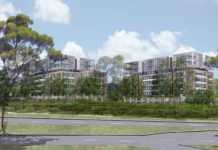 When developers push the planning envelope