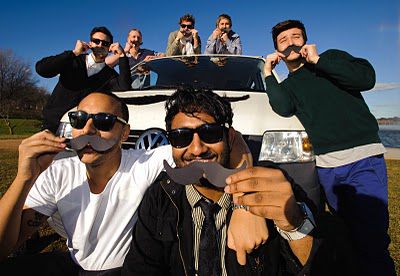 The “Mo Splendour Boys”: Ray Ali, Tish Karunarathna, Dylan King, Sam Colman, William Power, Jonathan Bills, Chris Patz. Photo by SilasBy Shereen Charles
WHAT started off as plans for a road trip to Australia’s biggest music festival amongst nine friends, has turned into a campaign to raise awareness for men’s health issues.
For the past two months, Ray Ali, Tish Karunarathna, Dylan King, Sam Colman, William Power, Jonathan Bills, Chris Patz, Francisco Naismith, Hugie Thorton and Nick Elmitt have been making calls to various businesses and organisations hoping to find sponsorships for their road trip to the Splendour in the Grass music festival in Queensland.
The boys, known as the “Mo Splendour Boys”, were driven by Ray’s experiences watching his father suffer from prostate cancer and later, losing him to some other complications. In a bid to honour Ray’s father, and sufferers of other men’s health issues, the boys decided to use the road trip as a means of bringing information on such illnesses to the masses.
“In our age bracket, we don’t really consider men’s health issues such as these illnesses. Men tend to have that sort of ‘we are invincible’ thing. So after we saw it happen to my family, we thought it’s a good idea to get around. We’re all going to this festival and we thought, why not do something worthwhile to help out?” Ray told “CityNews”.
The five-day road trip to Queensland is scheduled for July 24. According to Dylan King, the group will make nine pit stops from Wagga Wagga to Byron Bay where they will use public spaces to hand out flyers, set up donation boxes and share information.
All proceeds will go to Movember, an organisation that raises funds and awareness for men’s health.
Closer to home, the boys will be holding a fund raising event at The Front in Lyneham on July 23.
Admission is free and there will be donation boxes for those who want to contribute.