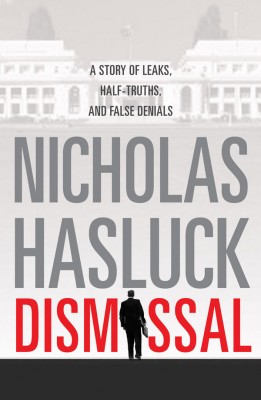 The reason is that Nick knows Canberra very well indeed. He was born here and went to Canberra Grammar before studying law at the University of WA and then at Oxford.

He was briefly an editorial assistant in Fleet Street before returning to Perth and working as a barrister.

He’s had a very distinguished legal career culminating in his appointment as a judge of the Supreme Court of WA in May 2000.

But he has returned here many times, not least when his father Sir Paul was Governor-General.

“Dismissal” is a political novel set in and around the workings of the Federal Government. Such books are few and far between.

I remember one in the ‘60s, a rattling yarn called “McCabe PM”; there was my own “The Paper Castle” in the ‘70s, but since then they have been very thin on the ground… not nearly enough to rate a genre of their own.

One of the problems is combining actual political events and characters with fictional characters and a storyline that carries the reader along an imaginary path without violating his or her knowledge of actual events. My admiration is unbounded for the way Nick has achieved a perfect blend in “Dismissal”.

He’s done it by telling the story – which runs from the Petrov Affair to the Whitlam dismissal by Sir John Kerr – from the viewpoint of bit players in the dramas. They add a new and thoroughly engaging dimension.