I’VE no information about the genesis of director Michael Winterbottom’s travelogue around the north of England and Wales, but once conceived, its gestation is a delight.

Steve Coogan plans a tour of rural hotels and their restaurants as the basis for a magazine piece to underpin a week of carnality with his American bird.  But she’s gone home, so Steve asks his friend and colleague Rob Bryden to take her place (without the carnality).

The resultant film has neither plot nor plan, a script limited to Steve’s nightmares, a professional cast of two, British blokeism (very likely contrived) and many reasons for us to laugh, or at least snicker.

Coogan and Bryden are talented mimics. In their ad-libbing of people such as Michael Caine, Anthony Hopkins, Billy Connolly etcetera, engaging more than challenging, gentle humour often overlays implied sadness. That it has no writer’s credit is irrelevant and a Good Thing.

Long exterior shots of snow-capped mountains are breathtaking. It can’t be mere coincidence that as Steve stands on a Yorkshire dale beside Ribblehead Viaduct, a freight train rolls along that major feat of 19th century railway building. 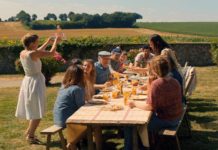