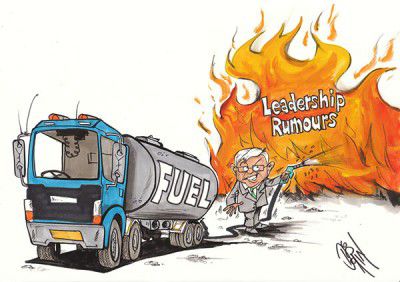 At a time when there are so many important issues being debated, the mainstream media seems obsessed with leadership speculation, says political commentator MICHAEL MOORE

CARBON pricing, plain packaging of tobacco, the disability insurance scheme, reform of the health system, agricultural sustainability and economic responsibility – important issues, unless there is a possibility of leadership speculation.

At a time when there are so many important issues being debated, the mainstream media seems obsessed with leadership speculation.
There is a reason. Seasoned journalists, editors and their followers know that speculation also provides a catalyst for change. Instead of the media being an observer reporting the facts, the interest behind stories and the colour of the political landscape, they can become a key player. They can play a role in bringing about political change.

Lord Acton suggested, in a letter to Bishop Mandell Creighton in 1887, “power tends to corrupt, and absolute power corrupts absolutely”. It is a sobering reminder of the concerns for those currently seeking to investigate the media.

Lord Acton’s next words might also provide an understanding of what has happened in the News Limited empire, particularly in the light of the phone hacking scandal in Great Britain: “Great men are almost always bad men.” The question is not whether the media should be free, but rather what are the appropriate constraints?

In our democratic systems there are checks and balances on the excesses of power. These include the separation of powers between the executive government and the parliament as well as between the judiciary, the government and the parliament. Auditors-general, Royal Commissions and other commissions of inquiry also help to keep a check on the way power is exercised. The most important of the checks and balances is that the people have a say every three or four years as to who should be in the parliament through the ballot box.

Apart from all citizens having the right to vote for governments, there is no more important check on the misuse of power than a free and open media. However, the question for any inquiry into the media becomes who should mind the minders?

“The Courier Mail” reported on Kevin Rudd spending time in his electorate suggesting that he is actively working to overthrow Prime Minister Julia Gillard. The explanation is illustrative: “When Rudd says he ‘supports the Prime Minister’, he does not use the name of the incumbent, Gillard.

“This means he can say he always supported the office without having to endorse the person actually in the office. By refusing to say he is or isn’t destabilising Gillard, Rudd avoids telling a big fib. Refusing to say something has been enough in the past for a leader to act.”

This is the modern test for a witch. If she drowns she was a witch, if she survives she must be a witch. If Kevin Rudd denies leadership aspirations he must be plotting – or he can admit it and we will now know that he is plotting. And all this speculation continues despite the fact that there is almost unanimous backing of Julia Gillard as Prime Minister from the entire cabinet.

A conspiracy theorist would argue that the speculation has little to do with reality, but is designed to take away from any celebration of achievements that are finally coming to fruition in this sitting of parliament. Julia Gillard has carbon pricing through the House of Representatives, despite the extraordinarily effective campaign of resistance that has been managed for an extended period of time.

So who should be minding the minders? Preventing concentration of media ownership allows different elements of the media to mind each other, allows for a diversity of views and dissipates inappropriate use of power.