AMANDA Jorgensen’s comfortable Griffith home is a haven of clean lines, with a sophisticated, restful colour palette, and pops of original art adding colour and vibrancy.

Having knocked down the original house on the block and built the home around six years ago when she was pregnant, Amanda admits they may have done things differently if they’d already had kids at the time.

“With hindsight, we’d have liked a rumpus, but we’re happy with the house,” she says. “From the beginning we knew we wanted a separate lounge, a classic, grown-up room that was just for us.“The pendant in there is Jonathan Adler, the lamp in the corner was a second-hand find for $50. We reupholstered the sofas – I’m a big believer in getting bang for your buck, so I chose a basic fabric because you don’t really notice it; the effect is created through other items, like the cushions, wallpaper and ottoman, which has been upholstered in a Romo fabric.”

Management consultant Amanda says her style is American transitional.“I wanted to create the feeling of a glamorous Manhattan apartment – in a family home in Canberra!” she says.Amanda says she loves items that are “neither traditional nor modern, somewhere in between”, but with a hint of understated glamour, such as the spectacular Gaetano Scolari chandelier over the dining table.

Having recently updated her sons’ rooms, adding colour through restful blues, Amanda chose Orla Kiely bedding for Will’s room, with a papasan chair covered in Mokum’s Mimosa fabric in Flax, which “cost $40 to buy in Sydney and $80 to get here!”, and a David Trubridge Coral pendant.

In Christian’s room, a wall of stripes in Porter’s Paints’ Flint and Hydrate add energy and fun, with a Tulip table from Matt Blatt and a bed that was found in “some bloke’s front yard”, says Amanda.

“I love a bargain and beautiful things,” she says. “I believe in only buying pieces you really love, even if it takes a while to find them.

“For me, half the fun is in the hunt.

“If you don’t love it, don’t buy it. You’ll only end up getting rid of it down the road anyway.” 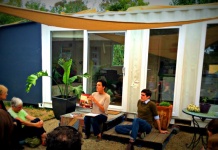