WITH a family room that was “freezing cold in winter and boiling hot in summer”, Carolyn Langley and Matt Ryan’s red-brick Hackett cottage badly needed an overhaul, she says – but it took them 10 years to get round to it.

“The room was unusable, with enormous west-facing windows,” she says.“We always said we’d renovate at some point because the house wasn’t suitable at all.

“But when we bought it, in March 2000, we had a one-year-old and the following year a new baby, so it just never happened.”

Carolyn says that they couldn’t even have people over, because the home had such an “awful” bathroom. “I just couldn’t bring myself to let anyone see it!” she says.

The cottage now has an extra bedroom, a study area, a new kitchen and a robust, contemporary exterior, which Carolyn says she loves.“We knew we wanted to incorporate Colorbond into the home,” she says.

“The greeny-grey works well with the Canberra light, which can be very bright and harsh, and it sits gently with the native garden we’re planning.”

The home is now flooded with light, with north-facing windows providing ventilation and making the compact home feel spacious. The pale wooden floors help to bounce light around the room, too, says Carolyn.

“They’re the original floorboards, but getting to them was like an archaeological dig!” she says.

“There were layers of different floor coverings – some sticky paper made to look like tiles from the sixties, horsehair carpet, things like that. It was wonderful to finally see the floors, which were in perfect condition. We were working to a budget so we didn’t do anything to them, and we love the light, natural colour.

“The family room is so bright and airy now, and the light plays out differently on every wall.”

Architect Judith Philips, from Philips and Associates, says the alterations and additions have given the house a new life.

Carolyn says they added 50 per cent again to the home. “It’s completely changed our lives – it’s been amazing,” she says. “There’s a better flow and the light is incredible now.

“We also replaced the roof and added insulation in the ceiling, walls and floor. We added storage, too, which has been wonderful – a large pantry, cupboards all along the hallway and built-ins in all the bedrooms. Finally there’s no clutter.”

Carolyn says the best thing is that they can entertain at home now.

“Now we have people over at least once a week – I’m no longer ashamed to show anyone my bathroom!” 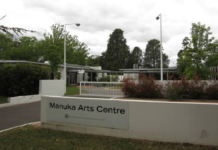 CityNews - January 24, 2020
0
ARTIST Geoff Filmer, himself a former volunteer firefighter, has posted an image of a special mural he's been working on in Garema Place, Civic.