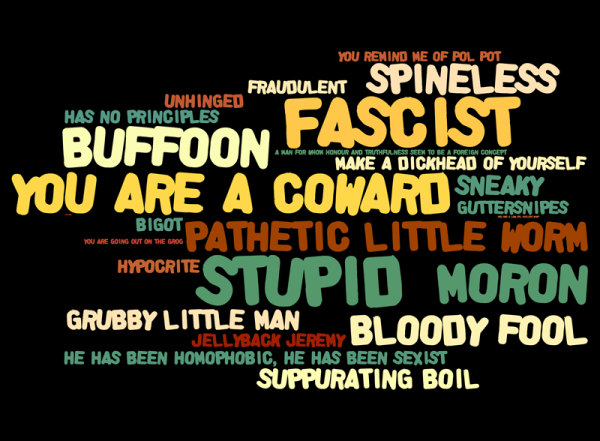 “IT’S a big porky”, “duplicitous”, “just mendacious”, “crap”, “Goebbels-speak”, “a bunch of shonks”, “two tongues”, “fraud”, “that’s trying to dupe” are all examples from the ACT Assembly which members were forced to withdraw.

There are the more blatant as well:  “You lied”, “she’s the biggest liar”, “grossly and wilfully misrepresented” and they go on.

Accusing someone of lying is certainly unacceptable in the heat of debate. If a member has lied to the parliament it is a serious matter that requires a full debate because parliaments cannot function unless information provided is accurate.

Ministers, for example, can lose their position if they mislead the Assembly.

The vigorous nature of parliamentary democracy grows out of the fact that it is a much more civilised alternative to sorting out differences by determining who is stronger or more vicious or who has the more powerful weapons.  People enter parliament largely because they believe that they can play a role in delivering a better world.

The conflict arises over different perceptions about what makes a better world. But even in the midst of vigorous debate there is a balance between being precious and going over the top.

The balance lies in the distinction between a personal issue and a substantive matter.

Examples from the ACT Assembly Hansard that have been deemed unacceptable include: “hypocrite”, “stupid”, “you are going out on the grog”, “unhinged”,  “bloody fool”, “Fascist”, “you are a coward”, “pathetic little worm”, “has no principles”, “grubby little man”, “spineless”, “suppurating boil”, “buffoon”, “make a dickhead of yourself”, “bigot”, “fraudulent”, “sneaky”, “jellyback Jeremy”, “moron”, “you remind me of Pol Pot”, “guttersnipes”, “he has been homophobic, he has been sexist”, “dog turds”,  “you are a lowlife, gutless wimp”, “a man for whom honour and truthfulness seem to be a foreign concept”.

However, there is one other interesting aspect which clearly degrades the individual making the comment as well as the Assembly as a whole.

These comments are rare and are based on gender. At times, the male members of the Assembly inparticular lower themselves to a personal attack based on women’s characteristics.

“A condescending bloody woman” was a comment Ted Quinlan was forced to withdraw a few Assemblies ago. Jon Stanhope was criticised over the term “dollying”. Speaker Greg Cornwell once made a reference to Kerry Tucker as a “Jezebel”.

Recently, in the poorest of political timing, Labor’s John Hargreaves (who on a previous occasion used the term “silly woman”) went over the top with a snipe at Liberal Vicki Dunne who he effectively described as “pear shape”.

The timing was poor as it allowed the Liberals to move the focus from $10,000 in volunteer funding they received, which was designed to help community volunteers withstand the global financial crisis. Having been caught they will now hand it back.

Whenever a member of the same party is accused of unparliamentary behaviour his or her colleagues wade in to defend the robust nature of debate.

Chief Minister Katy Gallagher took an overview when she commented on the Hargreaves matter: “We do need to take a step back, reflect on our behaviour and work to improve it.”

She added: “The people of Canberra deserve and expect better from their politicians.” She was right in one way, but should have been firmer with Hargreaves.

Without such a firm hand, it is possible that the Assembly will degrade to a constant exchange of personal attacks.