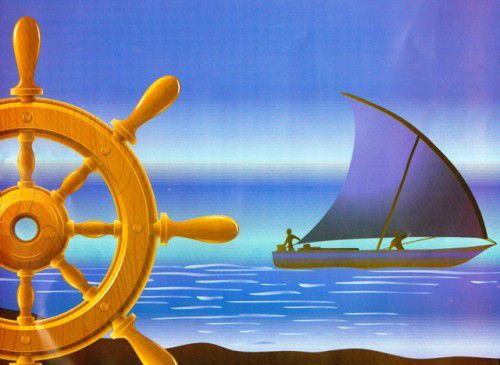 Ickle Pickle  productions, under the direction of  Justin Watson, has established a jolly format for holiday children’s theatre.

Get a bunch of kids together, train them in acting and singing and dancing and put on a show.

The results can be uneven,  as it is as much  about development for the children  than about finished product.

“Sinbad The Sailor” is no exception, with a simple set by Shepherd and a  script drawn very, very loosely from “The Arabian Nights”.

Writers Peter McDonald and Rachel Fock have constructed an improbable tale of the search for Nebuchadnezzar’s treasure on an unnamed island.

With lots of dreadfully corny jokes and  up-to-date references to plastic bags, the GFC, Angelina Jolie in other figures that go over the heads of the tinier audience members, the plot rocks along to a happy ending.

The cast of variable experience are  confident and agreeable, but the knowitall character of this script’s Sinbad, abetted by his sidekick Wyalong, proved  far too macho  for Claire Bailey and Emily Moran in these roles.

By contrast, Matt Hardy as Sultan Vinaga (get it, salt ‘n’ vinegar?) played the best role of his youthful career as the wicked villain of the play, and  things really livened up whenever he and his worldly sidekick Whyalla, played by Phoebe Deas, stepped on stage.

This production is jampacked with music. With musical direction by James Aspland and choreography by Natalie Whalley, it looks more like  “Sinbad the Musical”, so it’s time for Ickle Pickle to bite the bullet and have some live music.

Though there  were favorites tunes like “What’ll We Do with the  Drunken Sailor” and a headline song about Sinbad not being all bad, it was all a bit too tame.

A piano, an accordion, or a guitar would have lifted the energy level.