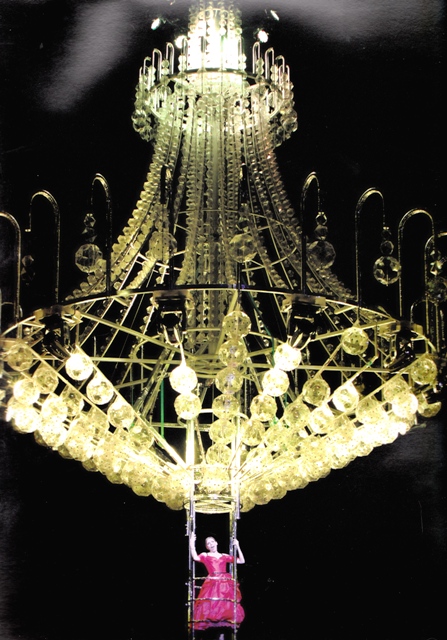 A spectacular burst of fireworks served as the final “curtain” to the opening performance of Opera Australia’s bold harbourside production of “La Traviata” on Saturday night.

A large crowd of opera lovers had gathered in seating before the large stage jutting out into the water, with both the Bridge and Sydney Opera House on the skyline.

Hovering over the performance was an enormous chandelier that the Phantom of the Opera would have killed for, a simple but brilliant conception by design Brian Thomson that, when lit by John Rayment, absorbed the moods of the work – glittering and  sombre.

Verdi’s  tragic opera was the ideal choice, both grand in its extravagant party scenes and intimate in that a very few characters are explored in some depth.

Emma  Matthews, who plays the doomed courtesan Violetta,  is celebrated as a virtuoso and uses her exceptional vocal range to run the gamut from drunken frivolity to the depths of despair.

Director Francesca Zambello has taken pains to emphasise the perils of pursuing the brittle, sophisticated life of the Parisian demimonde, enhanced by the updated but heavily-styled costumes by Tess Schofield. Zambello begins the opera as Franco Zeffirelli did, in the moments after Violetta’s death and playing the rest of it as a flashback.

She is aided by passionate performances from  tenor Gianluca Terranova as the young Alfredo, who stakes everything on the mysteries of love and baritone Jonathan Summers as his  father Germont, who totally misreads the character of Violetta.

To my mind, these two performers entered into the emotional depths of the acting rather more than Matthews, whose performance was brilliantly “out there”.

Unlike interior opera performances, for Handa Opera, the singers were “miked”, perfectly audible on a perfect Sydney night with the hidden orchestra flawlessly balanced.

This  is a daring gamble, designed to get opera out to the wider public; with the help of the weather deities, it should go well.