WE decided to go for a wander on Saturday afternoon in Braddon, to check out the new Lonsdale Street Traders, a renovated warehouse space now home to creative boutique shops – fashion, design, hair and more.

Starving, we thought we’d grab a bite only to discover that most eateries don’t open in Braddon on Saturday afternoon. Huh?

So we kept wandering and eventually hit the city where Tongue and Groove “saved the day”.

T&G, as the hip people call the place, won an award not long after it opened, for its seriously cool fitout, created by Sydney’s Paul Kelly Design, which specialises in bar, club and entertainment venues.

The space is massive – six-metre ceilings, a 3000-piece paper chandelier, huge postmodern concrete beams and other industrial components. You’ll be impressed by the power of it all.

The restaurant part is towards the back with some leather lounge furniture, to the right, near the windows where we sat to watch the world go by (actually Civic was pretty quiet, but you get my point… the streets are at least alive at night).

The wine list is reasonably priced with a fair number of decent whites (not all sauv blanc) and reds, starting at $7 a glass with many hovering below $10. And some Canberra wines feature – congrats on this front. Beer lovers won’t die of thirst with the large range of tap and boutique bottled beers.

And speaking of burgers. That’s what I had for lunch (although it was Saturday, so mine was $21) and it was one of the best I’ve had in yonks. Worth every cent.

Chef Ayhan Erkoc has created a spicy pulled lamb burger that is addicting. The red cabbage coleslaw and goat’s curd rounded it all out nicely. And the heap of fries it came with (no skimping here) were crispy on the outside with soft mashy potato on the inside and they didn’t get soggy through my meal. I bet the slow-roasted brisket burger ($21) would be just as addicting.

My friend got into the wood-fired pizza, wanting to keep it simple by ordering the buffalo mozzarella, napoletana sauce, fresh basil (well most of it anyway) and olive oil ($20). Clean tastes and not too heavy. Other pizzas include a pork belly, an exotic mushroom and a smoked salmon (which topped the price list at $25).

The music at T&G was very chilled out. Big tick there – indeed, a very big tick for T&G.

Happy in the sun, shame about the service 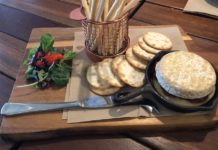 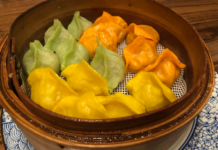 Dining / Got to love a good dumpling!