AFTER 19 years, the redoubtable Don Allan OAM, has been dropped over coffee as a columnist on “The Chronicle” as part of the hateful Fairfax economic self-flagellation being applied in Fyshwick.

But Allan, the only original thinker on the inky weekly, is a gadfly who won’t say die. He is continuing his political/community column by self-publishing online, styling it “An ACT Opinion” and seeking modest assistance – like public radio – from donors.

“Sadly, trying to meet the expenses involved in producing the column on an aged pension will not be possible unless I can recoup the loss of the small payment I received for my ‘Chronicle’ columns,” he says, hoping to attract the support of 100 Canberrans at $50 apiece on the promise that  it’s “not some quixotic fantasy or the seeking of fame or fortune, but a serious effort to help keep the flame of free speech and democracy alight in Canberra”.

MEANWHILE here’s a conundrum from the equally cost-challenged “Canberra Times”: First it announced that the arts editor’s role was to go. Rather than the ignominy of demotion, arts editor Diana Streak took the  Fairfax voluntary redundancy offer and steps down on September 7. Now, apparently, under pressure from the economic power of the Canberra arts community (who, “CC” is certain, doubtless threatened to lavish advertising dollars on the unwavering local arts pages of “CityNews”) for the retention of a dedicated arts editor, the paper has backflipped and been advertising internally for a staff volunteer to become… tra-la, arts editor.

AIN’T it funny how time slips away? Especially at Garema Court, the big white building facing Garema Place that’s been undergoing refurbishment for months now. Somewhere amid the facelift, the giant, landmark clock has been removed and in its stead some wag has put what looks like one more suited to a kitchen. 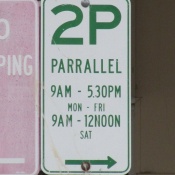 “CITYNEWS” loves exposing silly signs but this one, spotted on the main street of neighbouring Yass by our boarding-school educated gardening guru Cedric Bryant, is a collector’s item. It’s the parallel “r” that gives it away!

WHILE text messaging has been well used to break hearts, resigning in 160 characters or less is something of a first. 2CC afternoon announcer Mike Welsh’s producer Marion Rae (an adviser to former Greens leader Bob Brown) quit the Mitchell-based radio station, after only a few weeks, via a mid-week text message to the station’s program director.

CATHERINE Haskins and her chef husband Andrew have emailed customers to say their 3seeds cafe at Fyshwick markets will close after lunch on Father’s Day, September 2. The former owners of Pod Food at Pialligo created the concept of a cafe, gourmet store and cooking school at Majura Park, but moved in more recent times to the upstairs space at the markets vacated by the Japanese restaurant Senso. The cooking school, they say, has become so popular they have decided to expand, offering more classes, day and night Tuesday-Saturday, hence the cafe had to go.