LAST week it was licence plates, this week it’s Civic traffic lights that are going European. 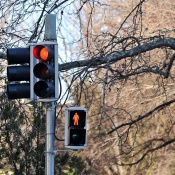 Snapper Silas Brown spotted the new lights on the corner of Akuna Street and London Circuit the other day and, knowing this paper’s passion for silly road signs, flags and urban furniture, came panting through the door declaring he had a “scoop” (of what, we chorused?). Anyway, he’s right – the sleek, new lights look as if they might make a red-light stop just a little more, as they say on the Continent, wunderbar.

Roads ACT manager of traffic signals Michael Day told “CC” they are trialling the imported European lights and are interested to see whether Canberrans prefer the change.

“They’re widely used in Europe, but we want to see how reliable they are first, too,” he said.

His understanding is that the National Capital Authority like the lights so much they are thinking of using them in the upgrade to the intersection of Anzac Parade and Constitution Avenue.
Just call us the new Milan…

A doodle on Google

HOW on earth did the Liberals hear about Health Minister Katy Gallagher sharing holiday time in France two years ago with the recently resigned executive who fessed up to cooking the emergency department books at the Canberra Hospital?

Not a lot of intrigue, alas. A random late-night doodle on Google by a shadow minister set the algorithm alight and, by some freakish quirk of circumstance, up popped the published fond memories of one of the vacationers skiting about happy times with the CM. Makes the Greens whinge about privacy invasions look a bit weak.

AND as the ACT political parties come galloping into the home straight in this year’s Election Stakes, some interesting odds tumbled out of the “CC” fax machine the other day. They came from a mysterious (ie not on Google) group called the Braddon Punters Club and showed its latest odds for the October poll.

Here are some of them: A highly unlikely Greens majority government is in at 100/1, Labor’s chance of majority rule firmed at 12/1 but the Liberals had the best prospects at 8/1. Despite that, in seats for the new Assembly, the club’s odds of 6/4 favour a 7 Labor/3 Greens /7 Liberals result against 5/2 for an 8 Liberals/2 Greens/7 Labor split.

RESIDENTS at an upmarket, waterfront apartment block at Kingston are wearily filling in insurance claims and scratching their heads about the state-of-the-art security system after thieves got into the carpark and damaged 26 cars the other night. That’s right, 26 cars. Lousy mongrels.

THE crazy, old Daddy Coolers at Ross Wilson’s Southern Cross gig the other night were breaking all the rules. The Eagle Rocker shamelessly urged his already less-than-sedate audience to ignore the warning card on the table from CEO Greg Mitchell and, ahem, make more noise. Call security because killjoy Mitchell’s note says: “Members and guests are requested to be silent during show time”. Silent? What, no clapping?

THAT ad man Warren Apps must have been hiding his light under a Fyshwick bushel when he was running Grey Group.

Since he took a slice of junior agency Coordinate, there’s been no stopping him and founder Jamie Wilson. Just weeks into their new partnership, they’ve landed, they reckon, the biggest advertising account move this year.

Independent Liquor Retailers, which has almost 500 stores under the Local Liquor and Country Wide Liquor brands across eastern Australia, has signed with Coordinate, following a competitive pitch from four agencies. What a coup for Coordinate.

SICK of the cold? Going stir crazy as winter grinds on? Our thoughtful friends at Events ACT have thrown us a sliver of hope for spring… they’ve put the Floriade NightFest tickets on sale with the promise that it will again transform Commonwealth Park into an after-dark wonderland next month with spectacular lighting and entertainment.

NightFest will run over five nights from Wednesday, September 26, to Sunday, September 30. And, though probably no link to it being election time, general admission has been held at $25. Bookings to www.ticketek.com.au or call 132849.

“CC’s” favourite thoughtful Socialist, the irrepressible John Passant, from Socialist Alternative, will be talking about “The Olympics: racism, nationalism and profit”, Room G8, Moran Building, ANU, 6pm on Thursday, August 16. He told “CC” his talk is inspired by the attacks on Olympian Damien Hooper for wearing the Aboriginal flag on his T-shirt at the event he describes as “the low light of the McDonald’s Coca Cola Games”.

CityNews - July 8, 2020
1
After about a month of being coronavirus-free, the ACT has recorded three new COVID-19 cases in the past 24 hours.