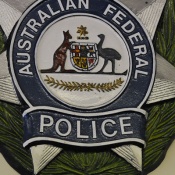 A 20-year-old Franklin man has been charged with assault after a policeman had his fingers jammed in a car window and his foot driven over during a traffic stop in Dickson late last night.

The man had been stopped by police around 11.50pm on Northbourne Avenue after his Toyota Camry had been detected speeding at 88kmh in a 60kmh zone.

Police say the officer had been attempting to provide the driver with a traffic infringement notice when the car window was abruptly wound up, jamming the officer’s fingers.

The driver released the officer’s fingers, but then started to drive the car forward. Police drew their batons and instructed the driver to stop, but the car continued forward and over the left foot of the officer.

The officer used his baton to break the driver’s window, then reached in and switched off the ignition. The driver was arrested and charged with common assault and a series of traffic offences. He will appear in the ACT Magistrates Court on August 2.