JENNA Cave and Sally Greenaway have sent a message for “CityNews” readers as they promote their new “Take it in Colour” EP, and it’s this. 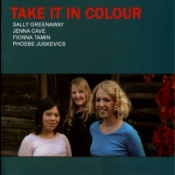 “We would like to dedicate this release to Mike Price, Miroslav Bukovsky, Eric Ajaye and the rest of the Jazz Faculty at the ANU School of Music for the most important years of our music education. Sadly, the Australian National University is closing its jazz program in 2013.”

We’ve commented before on the poignant emails that have reached this desk as the implications of change at the ANU sink in.

On the bright side, we can report that this is a new digital version of a compilation Canberra jazz album originally released in 2006. The digital release featuring the compositions by Jenna Cave and Sally Greenaway from “Take it in Colour” on its 6 year anniversary.

The original album was a collaborative project spearheaded by Greenaway in 2005, when she was a jazz piano student at the ANU.

Funded by grants from the ANU Fine Arts Student Association and the Friends of the ANU School of Music, the album was made up of jazz compositions by Sally Greenaway, Jenna Cave, Fionna Tamin and Phoebe Juskevics.

Recorded and mixed by Niven Stines, it featured performances by 24 then jazz students of the ANU School of Music, with standout performances by Michael Azzopardi and Niels Rosendahl.

Cave and Greenaway have since gone on to pursue careers as composers, and many of the other musicians involved have since made their mark as performers in Australia and internationally.

You can purchase and listen at  www.takeitincolour.bandcamp.com or by following the links from www.jennacave.com