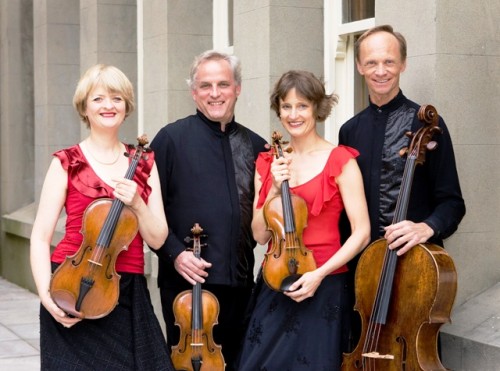 THE New Zealand String Quartet this year celebrates its 25th anniversary and the current line-up has been together for 18 of them.  You would think, therefore, they would have their communication and sound developed to perfection.

To conclude that this is so, one needed only to listen to the opening bars of their first piece, presented in the grand, beautiful, light-filled and warm-sounding Albert Hall.

To celebrate their 25 years, the NZSQ have embarked on a project to perform Beethoven’s string quartet cycle, all 16 of them, or 17 if you count the “Große Fuge” (Opus 133).

At this concert we heard Quartets 1 and 3 from Opus 59, written in 1806, when the prolific Beethoven was 36 years old and about four years into his hearing loss.

He had written six string quartets already (Opus 18), but the three Opus 59 works really brought to the fore Beethoven’s personality and the power of his imagination in his quartets.

In Number 1 we find drama, surprise, dance, melancholy and, in the last movement, a very long coda.

The second movement in particular, carrying an elaborate tempo marking, is almost a scherzo.  It’s only almost, because really it never quite gets there.

Even so it’s full of wit.  The listener is lulled into a rhythmic pattern – almost dance-like – only then to be taken somewhere else.

Number 3, too, takes the listener on an emotional roller-coaster.  Its beginning is brooding, sombre and introspective, but soon leads into a joyous, romping interplay of instruments.

The final movement is as grand as any of Beethoven’s symphonies and one easily could imagine a full orchestration.

In these two works, the NZSQ held an enraptured audience in its spell.  Barely a single splutter was heard, even in the breaks between movements.

I think the audience, as one, almost forgot to breathe. The unity of this ensemble is extraordinary.  The lines of communication are clear but subtle.

The instrumental sound is beautifully blended and perfectly balanced. The dynamics of the music never leave any one instrument “out in the cold”.

But when the music calls for a solo passage or emphasis, the transition is absolutely seamless.  There were times when we could hear with crystal clarity interplay between the cello and viola, then between the two violins, then across all four, one by one.

The New Zealand String Quartet is an ensemble four in one.  It oozes energy and silky smoothness, drama and power, expression and light.

We were privileged to hear them.