Home Politics Assembly Filthy risks in election year
Share Canberra's trusted news:
Facebook
Twitter
Pinterest
WhatsApp
THE trouble with playing in political sludge is that those who throw the filth invariably get their own hands dirty.

The McLeod review certainly did not clear Zed Seselja and his staff for their incompetent management of time sheets including identifying a “culture of non-co-operation” in the office of the Leader of the Opposition.

However, in the hype leading up to the commissioning of the audit by Ron McLeod, there were strong claims made under the protection of parliamentary privilege by Labor and by the Greens about the fraudulent use of taxpayers’ money to support the Liberal Party. 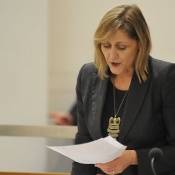 The review certainly did not validate these claims.

When the matter of mismanagement of staffing in the Liberal leader’s office first became public it was manna from heaven for the other parties.

The Greens and Labor were salivating at the prospect of embarrassing Zed Seselja to such an extent that he would have to step down. A change of leader within six months of an election over some form of scandal is a political gold mine. When it is about the Liberals and control of money, it is platinum.

The temptation was too great for Chief Minister Katy Gallagher and Greens’ leader Meredith Hunter. With sharpened knives they used parliamentary privilege to push the issue to the extreme. The approach was looking quite good for some time – until former Royal Commissioner Ron McLeod looked at the issue with a dispassionate eye.

He did find “a history of serious failure” to comply with legal obligations for records to be completed and submitted in a timely fashion. However, there was not much political gain as these anomalies had already effectively been admitted by Seselja who was committed to improving the processes within his office.

This should have left the report as a wet political blanket instead of the sensation that the Labor and Greens parties were expecting. Rather than letting it fizzle, Seselja decided to demand an apology. Perhaps he thought this might clear his name. All it did was extend airplay on the issue providing far more time to extend general understanding that something was wrong with the Liberal’s financial management.

There were some political negatives about the Greens and Labor refusing an apology but they were minor compared to having the financial management issue remain on the agenda.

As much as people argue that they want to take the dirt out of politics, negative campaigning provides a successful formula in the election context. Given the right opportunity, all parties play this game with some more extreme than others. One way to avoid as far as possible dragging all politicians and the parliamentary processes into the quagmire is to ensure more and more ethical protection and control.

It is not surprising that having examined the anomalies in the office of the Leader of the Opposition and aware of the context and accusations flying around, Ron McLeod looked at an enhanced role for an ethics commissioner. At the moment the role is advisory for all members of the Legislative Assembly. McLeod has recommended a first step for an ethics commissioner of ensuring a code of conduct clarifies the activities which are party political. He also suggests members make mandatory six-monthly declarations on money spent on parliamentary and electorate work.

In reality, it is difficult to define a clear line between parliamentary work and party work. Everything that an elected member and their staff undertake is likely to have an impact upon the likelihood of that member being elected. By the nature of parliamentary democracy there is a shadowy area of overlap between what is in the interest of the parliament and the people and what is in the interest of the political party and the member. A code of conduct and a method of monitoring will provide some improvement but there will always be temptations for those with power.

The real difficulty with mudslinging in an election year is that most voters will take the view of Mercutio in “Romeo and Juliet”: “A plague a’ both your houses”.

CityNews - November 22, 2020
0
ELEVATED pollen levels and the possibility of severe thunderstorms over the next two days are increasing the risk of a rare thunderstorm asthma event in the ACT region today and tomorrow.