ACT Labor has promised 69 new beds, more than 100 doctors and nurses and a boost to birthing services in an election policy for Calvary Hospital announced today. 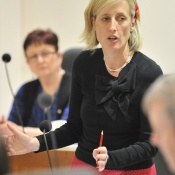 Chief Minister and Minister for Health Katy Gallagher said that if re-elected in October, Labor will spend about $63 million over four years for new beds and $850,000 for a birth centre at the hospital, which will include two new birthing rooms.

Ms Gallagher says over the past twelve months, approximately half of all babies delivered in the Canberra Hospital  birth centre were born to mothers living north of the lake, and that the new rooms would allow for 200 births per year.

“A new birthing centre on the northside of Canberra will allow more women to access midwife-led care and state of the art birthing facilities closer to home,” she said.

A new medical Rapid Assessment and Planning Unit will also be established as part of a new emergency response service for people who present at the emergency department with more complex conditions.

Ms Gallagher says in order to care for patients using these additional beds, Labor will employ an additional 13 doctors, 99 nurses and 12 allied health and support staff to the hospital.

Richard Calver - August 13, 2020
0
"The evening was punctuated by various exclamations of praise for this intense and complex shiraz." Wine columnist RICHARD CALVER waxes lyrical about a Mitolo shiraz.