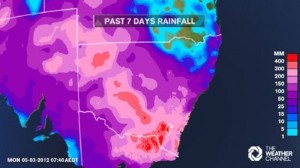 CANBERRA’S recent rains were the heaviest rains seen in the capital in 62 years.

“The volume of water falling from our skies over the past eight days is unprecedented,” The Weather Channel’s senior meteorologist Tom Saunders said.

“Nearly the whole of western, central and southern NSW along with most of northern and eastern Victoria has received at least 100mm of rain.”

Many areas across the two states recorded highest-ever eight day rain totals. And Canberra wasn’t far off; recording 202.8mm of rain – the heaviest in 62 years.

“As we begin a new week, the areas of highest concern are the Lachlan and Murrumbidgee rivers in New South Wales where Gundagai, Wagga Wagga and Forbes can expect major flooding over the next 48 hours,” Mr Saunders said.

“In Victoria the upper Murray River has swollen over five metres during the past week and is causing major flooding at Jingellic.

“Thankfully the rain has now finally cleared but major flooding will continue along the Lachlan and Murrumbidgee rivers for weeks ahead.

“Although the flood affected districts will not see any significant rain over the coming week, we expect a wet autumn for most of the country due to near record warm sea surface temperatures in the Indian Ocean.”