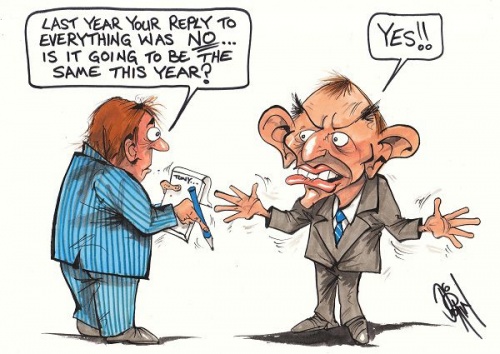 KEVIN Rudd’s plan to regain The Lodge with a direct attack on Julia Gillard’s leadership remains firmly on track. If it follows the script, the undermining will continue through the first half of the year and the frontal assault will be made in July.

By then, it is assumed, her popularity with the electorate will have waned even further than today’s disastrous numbers and the Labor Party’s support will remain in the doldrums.
This will be partly the result of her inability to bond with the electorate, but also the destabilising tactics of the Rudd camp.
Ministers will have privately briefed selected Press Gallery journalists of their intention to abandon the Gillard ship while Rudd himself will continue to assert his loyalty in the ever-so-slightly ambiguous terms required of a challenger who wants to control the timing of his coup.
This is essential to the plan. If he gives the slightest cause, the Prime Minister will sack him at a time of her choosing and that could wreck the delicately crafted plan.
The challenge will not be launched in caucus where Rudd would not have the numbers for a spill. Instead, a group of ministers and influential backbenchers will confront the Prime Minister on his behalf. They will tell her that they have given her every chance, but now they must look to the future.
Her leadership is terminal; the Party faces electoral disaster and the horror of a Tony Abbott as Prime Minister. They will ask her to put the interests of the nation ahead of her own by standing aside for Rudd, the only figure in the party who can offer electoral salvation.
She will resist. But she will also know that the very fact of the confrontation will be front-page news and will deal a death blow to her government.
Her forces have a fallback position. They will propose Bill Shorten as the bright new face of Labor, someone who can represent the wave of the future over yesterday’s failed Prime Minister Rudd.
However, the Shorten alternative won’t wash with the public or the Caucus and in her heart of hearts she knows it.
So, sadly and reluctantly she will accept the inevitable and resign in Rudd’s favour. He will offer her the ministry of her choice (Rudd would enjoy the thought of her bumping Wayne Swan off his Treasury perch), but she will graciously decline…for now.
She will return to the obscurity of the backbench until the election. If they win, she will return to the ministry; if they lose… well, who knows?
Meantime, Bill Shorten will be given a choice: fight and tear the party apart in a caucus battle or back Rudd now “so you can stay in Cabinet and have your turn next”. (However, Mark Arbib the other major player in Rudd’s downfall, will be shown no mercy. He’ll get the parliamentary equivalent of a firing squad much to the joy of all right-thinking Australians). Shorten will fold. Rudd will return triumphant.
So, how do I know all this? I wish I could tell you but I can’t. All I can say is that it didn’t come from Kevin.Journalist Robert Macklin is the author of an authorised biography of Kevin Rudd.robert@robertmacklin.com