“LABOR + Greens = Triple your rates” is the formula the Canberra Liberals have released as the first step to win the October 20 election. 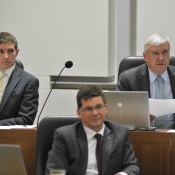 A few weeks ago it seemed the prime focus of the Canberra Liberals’ campaign would be attempting to paint a picture of a failing health system.

A couple of announcements supporting non-government schools and an additional green bin gave the impression of a campaign that would be based on tidbits to win over specific sectors of the community.

Now the debate will swing to “better local services with lower rates and charges”.

Today the Liberals Leader, Zed Seselja, has shown that his team is ignoring the predictions of another Labor-Green government and the idea that Canberra “is really a Labor town”.

Instead they have looked for the soft underbelly of the Government and worked to their own strengths.

The conservatives always argue that they are better money managers and this election will be no different.

They are on firm ground to this extent: the first Budget the Labor Government produced after it came to power was in 2002 predicted ACT revenue at just over $2 billion.

This year, the Budget predicts revenues approaching $4 billion. Despite this, there is a considerable increase in borrowing of almost a half a billion dollars and a predicted deficit of $318million.

Labor will argue this borrowing is not for short-term bills but for capital infrastructure – similar to taking a mortgage out on the family home. Hence, they have maintained a Standard and Poor’s Rating at the highest level of AAA.

However, sound financial management is a much harder argument to make against the challenge of “triple your rates”.

Zed Seselja and his shadow treasurer, Brendan Smyth, will not rest.

They are determined to persuade the community about their skills as financial managers. Before the week’s big announcement they provided a media briefing about how carefully they have priced each of their policies.

Smyth identified the assumptions, the basis for the figures and how they have determined the level of expenditure. Accusations of “back of the envelope” figures by the Government are now likely to get very little traffic in the media. The shadow treasurer explained how the Liberals have been using their time in opposition to milk committee processes, questions on notice and Freedom of Information to establish a sound basis for these policies.

The recent Quinlan Review of the taxation system claimed to be “fairer, simpler and more efficient”.  The claim is for a more socially just approach to taxation. Seselja will be denying both of these claims.

In doing so, the Canberra Liberals are attempting to grab the middle ground by challenging the traditional view of both the Greens and Labor as the parties of the socially disadvantaged.

The argument they put is that the lowest socio economic quintile of house owners will be paying the highest proportion of disposable income.

“The increase in rates,” according to Seselja, “is neither fairer nor more progressive”.

The difficulty for Labor is that the increase in revenue over the last 10 years is commensurate with the picture that the Liberals are painting for the coming decade.

The tax reforms proposed by Quinlan are based not just on increasing rates, but removing a wide range of indirect taxes to compensate.  However, the Liberals can simply assert that the removal of these other indirect taxes and charges will not eventuate.

The Liberals announcement and the thrust of their approach is to leave Labor on the back foot in the financial management debate. It is still
a big ask. The swing away from the Greens and Labor will have to be very significant if the Liberals are to come to government.