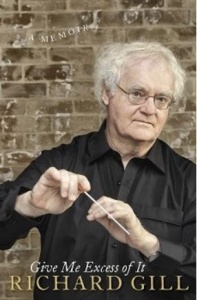 AS reported at citynews.com.au yesterday, Richard Gill, retiring music director of Victorian Opera, will soon be giving a lecture at the ANU on the subject of his new musical autobiography, “Give me Excess of it”, to be launched by Pan Macmillan on Tuesday.

He confirms that, as organisers of the event wrote to us yesterday evening, his talk about 70 years of life in the world of Australian music had been negotiated early in the year, well before the emergence of a crisis at the school.

“I will be talking about music education generally and I’ll be happy to take questions and to give answers,” he said.

But Mr Gill declined to be drawn into any press controversy at this stage that might pre-empt what he will  say in his talk.

Asked whether any association with the ANU would be damaging to his reputation, Mr Gill responded: “I won’t answer that question, because that has nothing to do with it.”

Rather, he pointed out, the book traces his life from school days to conducting and directing an opera company.

But he did confirm that he’d “had extensive phone conversations from both Sydney and Melbourne” with the ANU and the office of vice chancellor Ian Young on many occasions, though not, as previously related by music staff, in person.

He rejects the claim by Stopera director Vivienne Winther, reported yesterday,  that appearing in any  ANU event would sully his reputation, and said he had personally phoned Ms Winther late yesterday to argue that by appearing, he could bring important questions of musical education out into the open. “I believe Vivienne does not want to undermine what I have to say,” he said.

Nonetheless, when it comes to the beleaguered staff at the School of Music, he affirms, “I’m on their side.”

Turning 71 this year, and retiring on January 1 from the Victorian Opera, which he founded, Mr Gill says “it’s a lovely feeling,” but that he will resume a freelance career in music and opera. In fact, he’s already booked up for the next couple of years.

Of the School of Music crisis he says, “I don’t have a negative spin on any of this… I can make a point by referring to the fantastic work done in Canberra… it’s never too late to recover, I honestly feel, and I don’t want anything pre-empted.”

CityNews - November 24, 2020
0
About 150 returning Australians will fly into Canberra on Thursday (November 26) aboard a government-facilitated flight from Singapore.