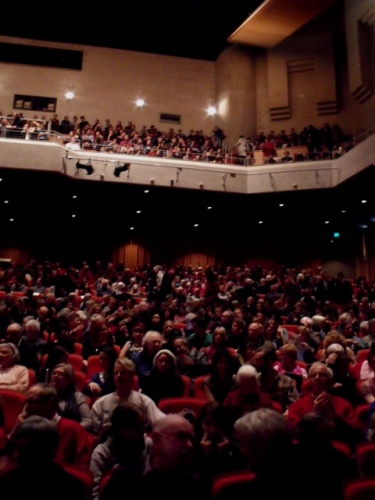 IN AN extraordinary show of strength, the ANU School of Music staff and students last night came out fighting with what they knew best — music.

In a three and a half hour marathon concert largely uninterrupted by political comment, a packed-to-overflowing audience at Llewellyn Hall (hasty arrangements were made to accommodate the spillover in the Larry Sitsky Recital Room with live streaming) heard an outpouring of musical brilliance.

Many of the musicians –jazz and classical—wore gold ribbons, the symbols of their campaign to be heard by the ANU’s vice-chancellor, who was not present, though his predecessor chief scientist Ian Chubb was present and stayed until the end.

Head of the school, which allowed the concert,  Prof Adrian Walter, was not in attendance.

After a haunting flute performance where musicians played from the hall, the concert organiser, Andrew Rumsey, gave a rousing introduction, declaring “music has a way of bringing a community together”. To loud applause he added, “ if there is a future of peace for peace I believe it will come from the arts”.

Some of the music was melancholy and dignified, as with  Peteris Vask’s “Viatore” by the School of Music Chamber Orchestra, heard in absolute silence, or  the disturbing “Disestablishment Blues”, performed by the Jazz Faculty.

At other time there  was humour. Geoffrey Lancaster and Alan Hicks drew laughter from their competitive rendition of a Mozart sonata. Later, pianists Rumsey and James Huntingford used the same trick in a Beethoven scherzo.

There was angry music too, from pianist Philip Johnston and Arnan Wiesel, both performing toccatas by Prokofiev. The MC likened the present situation to the Stalinist era in which Prokofiev wrote his works.

Though the evening was to end of a sombre note with a Dvorak Slavonic Dance played by Prof Larry Sitsky in acknowledgment of “My wounded colleagues” and two gentle works by the School of Music Chamber Choir, much of the evening was sheer entertainment.

Huntingford whizzed through “Flight of the Bumble Bee”, soprano Rachel Thoms poured her heart into “Sempre Libere” from “La Traviata”, while Christina Wilson and Louise Page sang one of the most popular items in the operatic repertoire, “The Flower Song” from “Lakme”.

Throughout the night,  the audience stamped, shouted, and clapped in appreciation of a School that has no intention of going quietly.

But then again, as the MC said: “A concert like this may not happen again.”

Belinda Strahorn - November 24, 2020
0
Despite many retailers saying no to cash for hygiene reasons, retiring  Royal Australian Mint boss Ross MacDiarmid says COVID-19 forced many people to use cash and stash left over coins in piggy banks, jars and wallets.