WHILE voters should reward those politicians who really do stand up for what they believe and are not unduly influenced by polling, only the most “courageous” politician will ignore the polls. 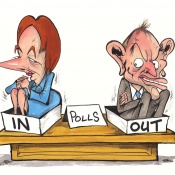 Polling is a major feature of modern politics with large sums spent on pollsters by the political parties, the media and groups wishing to influence political outcomes.

Particularly with an election pending, polls do influence policy, behaviour, leadership and direction.

There is an irony in the vulnerability of party leaders to popularity polling. Leaders such as Bob Hawke and John Howard turned election campaigns more to presidential-style leadership battles and less about the local members. In doing so, they have made the leaders much more vulnerable to execution by elected party members.

When asked about adverse polls there is a set of stock answers…  “There is only one poll that counts”; “We are not paying attention to polls – we are getting on with the job”; “We are not poll driven”.

Such answers are not to be believed. All politicians – and none more so than the leaders – are acutely aware of each and every poll, whether conducted internally or externally.

Remember a year ago when Prime Minister Julia Gillard was polling appallingly, as was her party? The pundits were almost all predicting a Liberal victory. This is still the most likely outcome. However, I repeat what I wrote in March at Labor’s darkest hour in the polls: “There are not many people putting money on Labor to win the next election. Provided they don’t keep tripping over their own feet Julia Gillard ought not be written off as a contender for the next election”.

At the time Labor was operating under the burden of introducing the carbon tax and Opposition Leader, Tony Abbott, threw all his eggs in the one basket warning of the dire outcomes. The gross exaggerations are now coming back to bite the conservatives. Enough political observers and ordinary voters can remember past the last TV news grab, even the last week, month or year, to recall the constant barrage and fear campaigns on carbon taxes and refugees to question the level of honesty of the alternative government. Perhaps that is what is now being reflected in their declining popularity in the polls.

Polling also plays a key part in the development and implementation of policy. While the parties may have used careful process based on sound academic rigour and broad discussion in their membership to adopt sound policies, the elected members may not move to implement them if the polls are unfavourable. Polling and focus groups are used so widely that elected members of the party become fearful of implementing controversial policies.

In the aftermath of a major fear and distortion campaign by the mining industry, the very sensible mining super-profit tax fell to adverse polling. How many more sensible policies have not seen the light of day because elected members are fearful that the introduction of a policy will impact on their chances of election?