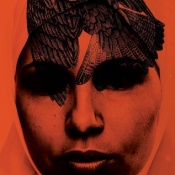 Gibson, of course, is the talented young writer whose play “Widow Bird” opens at the Street Theatre this weekend after having been chosen from 600 submissions to be part of the recent Women Playwrights International Festival in Stockholm, with one act performed by Swedish actors in English.

A “Canberran by choice,” having moved here from Albury-Wodonga about 10 years ago to study at ANU, nowadays she is a full-time speechwriter in the Department of Education, Employment and Workplace Relations (“good experience for a playwright” she says), she’s just put the finishing touches to her script and turned to the production side of things.

“A large part of the writing of the writing task is behind me. It’s difficult with two hats on at one time… last weekend I made the final and revisions, then I actually put on a hat and then took it off, to say to the cast, and ‘now I am producer.’ ”

Playwright and producer are two very different roles, but producing has made her understand the “pragmatism” of the theatre and that some of her writer’s directions are “really difficult to achieve.”

“Sometimes I say to myself, “if I were doing that now, I would have made it more feasible.” We note that Shakespeare was also a stage manager, and must have picked up a few tips the same way.

Learning about production was a steep learning curve, but luckily she had Caroline Stacey, the director of The Street Theatre, to guide her. “The whole page to stage concept is going to help me as a playwright,” she says.

Gibson has she’s acted, though a long time ago, she’s stage-managed, she has volunteered to 2XX and now she’s learning the craft of producing, all very different roles for someone making their way in the theatre.

The director of “Widowbird” is a New York theatre academic, Joanne Schultz, formerly artistic director of Ninth Street Theater, a collaborative house based inNew York’s East Village. Schultz has previously assisted Stacey with the behind-closed- doors readings that form part of The Street Theatre’s “Hive” development program at which the “Widowbird” prototype was first aired.

“We kept up by Skype and email, she was obviously very keen about the script–a real advocate,” Gibson says.

So, where do her ideas come from?

“It all comes out of my own head,” she tells me, but quickly revises that. “I must say that Antigone is my favourite play ever, especially in Anouilh’s ‘Antigone,’  she is such a strong female character with all her stubbornness, determination, the fact that she can damage herself by being so blinded.”

“Widowbird” is set in the ancient world, maybe ancient Greece or Persia– we are not told.

“In the end I decided on not setting it anywhere. It’s epic and ancient and I don’t want to pin it down…and it’s not set in contemporary times.”

While its a serious play about sacrifice and loss, Gibson believes “it could be considered a little bit cynical too…the realisation is that you can’t change the world.”

In writing the play she feels she’s “invented a mythology,” all centring on the main character,  Atajarah, who discovers her tears have the power to heal.

The actors, Leith Arundel Raoul Craemer, Dene Kermond, Alison McGregor, and Joanna Richards, she reports, are finding plenty of depth in the play which, although there may be some lighter moments, has a sad ending and is, Gibson asserts, “absolutely a tragedy.”

She is very struck with something that Schultz said in rehearsal – “there’s absolutely no subtext in this.” That is impossible, given the symbolism in the play, but on the other hand, as she points out, most of her symbols translate into actual things, blindness, for instance, is seen in real blindness.

Gibson is excited about the visual side of the production, a beautiful minimalist symbolic set by Christiane Nowak, a design graduate of Bauhaus University inWeimar, now living inCanberra. She understands totally that Gibson has not written a naturalistic play at all.

Five actors play 12 characters, deliberately so, with one special character Arundel written in the manner of a Greek chorus.

She reiterates that the play is “not relieved by comedy, only a few moments of lightness.” We draw the comparison between the moments of humour in King Lear, and Gibson is well aware that you need the lighter moments to make absolutely sure that the audience doesn’t laugh at the wrong moments—“without lightness, you can’t get darkness,” she says.

It’s about 90 minutes long (“quite long enough for such a brutal piece”) and one interval about an hour into the play.

All the while, Gibson is working on two other plays as part of her JUMP mentorship facilitated by the Canberra Contemporary Art Space.

The more exotic of the scripts is set in her hometown, Albury-Wodonga, and concerns be notorious “Pyjama Girl Mystery,” a murder committed about 80 years ago in which former Victorian Police Commissioner Bill Mackay was involved in wrongly arresting an Italian man for the crime. Among the intriguing details that emerged was that while the corpse had blue eyes, the supposed victim had brown eyes. Gibson has been having a fascinating time interviewing elderly people with a view to creating a verbatim theatre piece, but most of the interviewees want the details “off the record.”

Another thing that interests her as the idea that some women see themselves as victims, so she’s also basing another play on Hans Christian Andersen’s “Little Mermaid” story, somewhat inspired by the famous statue in Copenhagen during her recent Scandinavian wanderings. This, like the pyjama girl story, is leading Gibson into new and fascinating explorations of identity.

One thing is certain, Emma Gibson won’t be running out of ideas for plays any time soon.