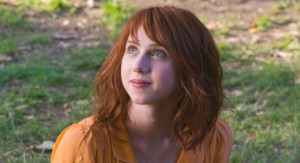 Zoe wrote the screenplay for this romantic fantasy with a twist and plays Ruby opposite her partner Paul Dano who plays Calvin, author 10 years earlier of a successful novel, now afflicted with the dreaded writer’s block.

Calvin’s brother Harry (Chris Messina) pushes him back to work. Calvin gives it a go, creating a character whom he names Ruby. Then he meets a girl called Ruby. Then he discovers that what he writes on his well-kept manual Olympia typewriter determines what Ruby is and does.

The film’s dramatic thrust develops from Calvin’s concealment of this dangerous power. Its tension arises from wondering about the long-term effect that it portends for the relationship.

The idea works more credibly than one might expect. It’s tempting to suggest that Kazan and Dano have developed their characters by drawing from their off-camera lives. Their performances are both admirable. When things come totally unstuck and Calvin loses his cool in a big way, the acting goes ballistic on an impressive scale.

The film delivers its mix of feel-good and concern with a fresh and independent style.