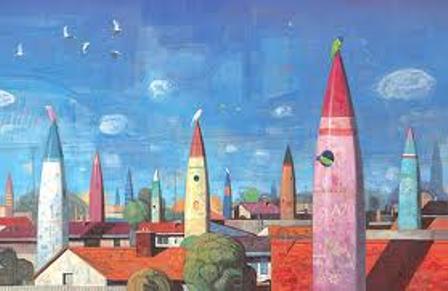 JUST about all our readers will know that Shaun Tan is a freelance artist and author in Melbourne.

He’ll be at Manning Clark House on Friday for the opening of a small show of his works.

Tan began drawing and painting images for science fiction and horror stories in magazines as a teenager, and has since become best-known for illustrated books that deal with social, political and historical subjects through surreal, imagery.

Books like  “The Rabbits”, “The Red Tree”, “Tales from Outer Suburbia” and his “wordless” novel, “The Arrival”, have been widely translated and enjoyed by readers all over the world.

Tan has also worked as a theatre designer, most famously on the adaptation of  “The Lost Thing” by Greg Lissaman, director of Canberra’s Jigsaw Theatre, and seen at the NGA  in 2004.

Tan worked as a concept artist for the films “Horton Hears a Who” and Pixar’s “WALL-E”, and directed the Oscar-winning short film of “The Lost Thing” with Passion Pictures Australia.

In 2011 he received the Astrid Lindgren Memorial Award, for  his contribution to international children’s literature.

His work has been seen recently at the Canberra Museum and Gallery in the touring exhibition, “Look! The art of Australian picture books today”.

CityNews - May 27, 2020
0
Depending on weather, a 120ha burn is being conducted at Pierces Creek today (May 27), and smoke cover is likely to be visible across parts of Canberra.