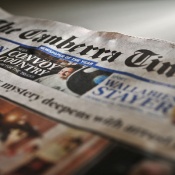 AS the member for Fraser Andrew Leigh warns of a national crisis of shallow journalism, experienced staff at “The Canberra Times” appear to be jockeying for the Fairfax redundancy offer, with long-time editor-at-large Jack Waterford said to be tempted.

The media company’s announced strategy of reducing the number of journalists at its Sydney, Melbourne and Canberra newspapers through voluntary redundancies has been the source of speculation for weeks, but the final list of who who’s going will not be properly known until after the offer closes on August 24.

Yesterday, news site Crikey reported: “The Fyshwick newsroom is abuzz with rumours that Canberra identity Waterford – who started at the paper as a cadet in 1972, rose to be editor in the 1990s, and is seen as the heart of the publication – is leaving.

“Some newsroom sources claim he appears not entirely happy with the direction of ‘The Canberra Times’ in recent years, and with the latest round of job cuts. As a 40-year veteran of the paper, Waterford would be in line for an eye-watering payout – if editor Rod Quinn were to let him go.”

However, earlier reports from Sydney suggest that Fairfax has a list of journalists it doesn’t want to lose and, despite applying, will not be offered the redundancy deal that includes four weeks pay for every year worked. Given Waterford’s journalistic value to the paper, let alone the size of a payout, it would be hard to imagine “The Times” will let him go in this round.

Crikey speculates that the possible loss of Waterford would compound the flight of experienced “old hands” from “The Canberra Times”.

Strangely, environment reporter Rosslyn Beeby, who worked there nine years, was catapulted from the paper only days after applying for redundancy.

The changes have sparked a backlash from Canberra’s arts and literary community and  Crikey understands some companies are reviewing their advertising spend.