I FIRST met Todd McKenney around 13 years ago when the young hoofer was in Canberra to promote a new show called “Boy from Oz”. He was singer-songwriter Peter Allen, we all thought. He’d even met Allen once at a barbecue. 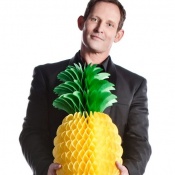 Then Hugh Jackman came along and took the role to Broadway in a new production.

Unfair, we all moaned. But life goes on and McKenney is now famous in another way, known for outrageous appearances in shows such as “Dancing with the Stars”, “You May Be Right” and the musical “Annie”.

So how did he feel when Jackman got the lead role on Broadway?

“At the time, it was very difficult,” McKenney tells me. “Naturally, I was bitterly disappointed.”

But with hindsight, staying in Australia opened up new doors and, more importantly, brought him personal happiness – “I’ve got a daughter,” he says, “I’d never have had her if I had gone to the US.”

The birth (conceived by IVF with his close friend Anne Wood) raised eyebrows in the showbiz world, but as McKenney says: “It’s not so unexpected,” a point he makes several times.

“The off-stage Todd is very different to the on-stage one… I call him ‘a character’… you can’t be like that 24-hours a day, but he’s a really fun character to play.

“My shows are only loosely scripted, anything can happen.”

And he’ll bring that kind of improvising to the new Peter Allen show he’s bringing to Canberra.

With many brilliant songs, including “I Still Call Australia Home”, (the “unofficial national anthem,” McKenney says) “Go to “Rio”, which helped build Allen’s reputation as a rampaging party boy, there are also touching numbers such as “Tenterfield Saddler.”

“I needed to make it interesting to me,” he tells me, so in the first half he’ll do some of Allen’s own personal favourites by Al Jolson, Fats Waller and Judy Garland (his former mother-in-law), then in the second half it’ll be more solid Peter Allen songs.

As well, he’s devised “Up Close and Personal”, a 45-minute pre-show event where he plays a half-hour TV documentary, tells a lot of silly stories about “Dancing with the Stars” and invites the audience to ask questions. “It’s almost like dishing the dirt,” he says.

McKenney is also giving boys and girls aged 8-12 the chance to sing “When I Get My Name in Lights” live on stage in the show, but entries close one week before the date of each show, so visit www.toddmckenney.com.au

“Songs and Stories of Peter Allen”, at the Canberra Theatre, October 26, bookings to 6275 2700 or www.canberratheatrecentre.com