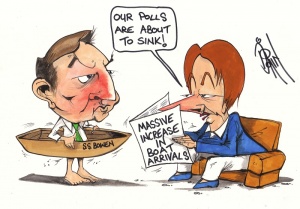 The usual Left-wing goals of the Labor Party in pursuing equity and social justice seem to have been lost in this bloody-minded pursuit of a positive fiscal outcome.

The truth is that Labor is caught in a bind and young Canberrans in particular suffer with stringent controls on employment in the public service.
On the one hand, they have been elected to deliver on the principles that drive the philosophies of their party. On the other, if they are not re-elected these philosophical goals will be lost to Tony Abbott and the Liberal Party, that he has taken down an ultra-conservative path. An even worse outcome!

Maintaining a surplus is not as much about an ideological commitment to fiscal responsibility as showing Labor can manage the Budget at least as well as the Liberals. It would be just as fiscally responsible to run a small deficit at a time when expenditure is needed to meet the needs of those who are most vulnerable in our society.

When the Government announced initiatives such as the National Disability Insurance Scheme, it understood the costs would be considerable and would have a major impact on the Budget.

The money has to come from somewhere. It boils down to two choices – savings or taxation. Governments invariably balance the two in establishing how to pay for the priorities that are guided by their ideology. In the past, Labor governments have lost elections as the Budget has become more demanding, and rather than increase taxation or slash services commensurate with spending on new initiatives, they have borrowed excessively. The approach provided fertile grounds for very conservative governments elected to viciously slash spending as did Jeff Kennett in Victoria and, more recently, Campbell Newman in Queensland.

There can be little doubt that Australia’s ability to maintain a strong financial position through the global financial crisis was strongly influenced by the surplus established by Treasurer Peter Costello and the Howard Government. However, ordinary, working Australians were also fortunate that a Labor Government was prepared to use the surplus for appropriate spending to maintain jobs and support businesses through the worst of the crisis.

The media plays an important role in painting a picture regarding the fiscal calibre of a government. In selling the message of fiscal responsibility, the Gillard government has chosen a catchphrase that the community has no difficulty comprehending – Budget surplus. For Labor, the maintenance of a Budget surplus removes any compelling need for the community to feel the need for a change of government. It identifies Labor MPs as responsible financial managers.

No matter how hard Labor works towards a surplus, some will still find a way to be critical. “The Weekend Australian” recently blared a front-page headline “Budget splurge spending up $32bn” and in a later section: “Budget monster out of control”. The message was clear in the first few paragraphs – government was spending too much and could not be trusted with our money.

The editorial intention was blatant. Labor is caught in the middle. The expectations of their own constituency to deliver on better health outcomes, a fairer social deal, more effective education and more equitable community cannot be achieved without expenditure.
However, they are in an ideological battle with conservative forces pushing for a reduction in taxation, smaller government and more vigorous slashing.

There is no need to guess whether or not an Abbott government would start with the same level of cuts to devastate the public service and employment in Canberra. Joe Hockey has made the intention of the Coalition government abundantly clear.