ABORIGINAL Community Controlled Health Service Winnunga Nimmityjah celebrated a successful 25 years today with a huge birthday party on the grounds of the health centre in Narrabundah. 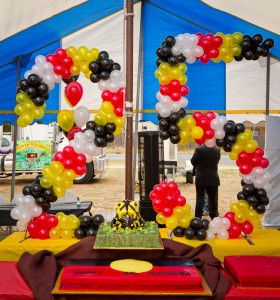 Hundreds of people had already arrived at the celebration just half an hour after it began at 10am this morning, and organisers said they expected about 700-1000 people to attend throughout the day.

Children were having fun on a rock climbing wall and a “Finding Nemo” jumping castle, while others said hello to an alpaca, a cute young piglet and other friendly animals in a miniature petting zoo.

Catering included a barbecue with all the trimmings as well as party food like fairy floss and popcorn, and the all-important coffee cart serving up hot espresso. 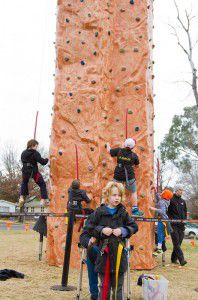 Local indigenous artist Calca Freeman, whose work is on show in the “Our Vision, Our Story” exhibition at the nearby Southside Community Gallery, was among the growing crowd, several of whom had recognised her from recent appearances in the media, she said.

The party included a performance from indigenous dance group Wiradjuri Echoes, and music provided by hip-hop group Last Kinection, featuring brother and sister Joel and Naomi Wenitong who are members of the Kabbi Kabbi people from south-east Queensland, as well as Angry Anderson and the James Southwell Band. 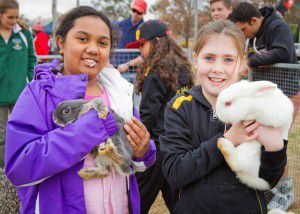 Angry Anderson said that 25 years was “a real milestone” for the Aboriginal Community Controlled Health Service, which grew out of the struggle for recognition of Aboriginal Australians in the late 1980s, when many indigenous Australians and supporters came to Canberra for protests like the Tent Embassy, and specifically to present their perspective on Australia’s colonial past to the Queen at the opening of Parliament House.

Winnunga Nimmityjah means “strong health” in the Wiradjuri language, a name chosen by the late Olive Brown, who founded the health service in 1988.

“I’m getting the feeling that after 25 years, they’re serious,” said Anderson, adding that playing at such events was part of a conscious decision he had made a long time ago to “become part of the solution, not part of the problem”, with respect to  efforts to ‘close the gap’ between Aboriginal and non-Aboriginal Australians.

The Rose Tattoo frontman and federal National Party candidate said he believed that initiatives like Winnunga Nimmityjah, which grow from within the Aboriginal community and give Aboriginal people a sense of ownership, were generally more successful.

“The thing about it is, if you own something, you’re empowered; the solutions have to come from the Aboriginal community.”