“For me it’s all about the people, the human spirit,” says the born-and-bred Canberran.

“When I first started making my prints there were lots of nice monument pictures around, but I wanted to capture what people do here.

“Canberra can be a transient place – people are posted here for a time and there’s lots of comings and goings. But when the cafe culture exploded, and we started to get mothers’ groups, cyclists, students, office meetings, all happening at the same place, I wanted to capture that.”

He’s “done” Tilley’s, Lonsdale Street Roasters, The Street Theatre and Gus’s, among others and the list continues to grow, he says.

“I’m never short of inspiration; in fact, I’m more likely to get distracted by another idea,” Mick says. “The hardest thing is staying focused, but I do believe in having as many ideas as possible. Don’t hold on to one idea so hard that you butcher it.” 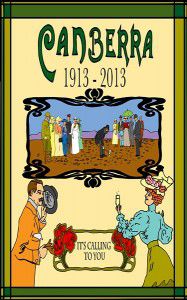 For his cafe series, Mick takes digital photos then outlines and colours them digitally using coffee-inspired, sepia colours to create a digital lino print. Others are hand-drawn on a Wacom tablet.

“Digital art is hard to put a value on, because the quality in reproduction stays the same,” he says. “I do limited-edition prints so there is a sense of authenticity.”

Mick, 43, says he’d been drawing since he could walk, but art wasn’t encouraged by his parents as something he could make a career out of.

“I spent 20 years in the public service doing what I had to do – now I plan on spending the next 20 doing what I want to do,” he says.

“It wasn’t easy to leave a safe, secure job in the middle of the GFC, but after much discussion with my wife, I took a package and left.”

And his business Leafy Sea Dragon Artwork was born – bearing the name of a favourite quirky sea creature.

“It’s a bit of a random name, but quirky, vibrant and interesting, like my work” he says. 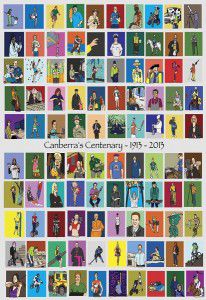 Mick produces greeting cards, tea towels and bookmarks as well as his prints. His latest Centenary series depicts every decade in the last 100 years, mocked up as vintage posters. The last one displays 100 Canberrans, from the Chief Minister to the Action bus driver.

“I like art that captures ordinary things, and when there are people featured it’s infinitely more interesting.”

Mick sells his artworks and products, including prints, greeting cards and tea towels, most weeks at the Old Bus Depot Markets. More information at mickashley.org