“CITYNEWS” readers will have noticed the recent increase in so-called “pop-up”  exhibitions, but today the Ahmadiyya Muslim Association of Australia’s  Canberra Branch held a pop-up event of a different kind in  the ACT Legislative Assembly public reception room.

Flanked by banners featuring the organisation’s motto “Love for all, hatred for none,” were books about Islam and a translation of The Holy Quran into many world languages, including, French, Spanish, Danish, and even Swahili.

Among the visitors who “popped in” on their way to and from a public demonstration about marriage equality outside were the new Canberra Liberals MLA, Nicole Lawder, and Labor Member for Ginninderra, Mary Porter, and ACT Minister for Multicultural Affairs, Joy Burch, who accepted a presentation of the Quran translated into English and a plaque honouring the Centenary of Canberra.

Ms Burch listened to explanations of the pacifist background to the movement, which began in British India in the late 19th century and which espouses the idea of loyalty to both religion and state.

While the organisation in Canberra is numerically small, it was explained; it is part of world-wide network that numbers around 200 million adherents and has focused on humanitarian work through its many schools and hospitals.

Today’s exhibition was part of a drive to raise the profile of the Ahmadiyya community in Canberra. 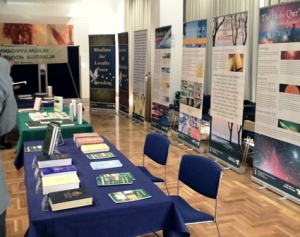 CityNews - May 20, 2020
0
Canberra's been on a role lately with no active coronavirus cases, and that continues today (May 20) with ACT Health confirming no new cases.