THE ebullient Brian “Frog” Harris, owner of Songland, one of the last two record shops in Canberra, got a big metaphorical kiss on the nose from veteran singer-songwriter Russell Morris the other night.

At the end of Morris’ set at the Vikings Club in Erindale, Frog – a man untroubled by modesty – was the subject of a surprise presentation by Morris with a “gold record” acknowledgement for the music vendor’s enthusiastic support and advocacy for the singer’s astonishingly successful recent blues album “Sharkmouth”, recorded as a “labour of love” and inspired by Australian characters from the ‘20s and ‘30s era.

AFTER five years away from Canberra’s hospitality scene (possibly simply to catch up on sleep) CC was surprised to hear of a recent return. Following the sale of his cheeky little blog, The Canberran.com, to Out in Canberra, Nic Crowther has joined the ranks of the OIC. And what next for The Canberran? Well, we understand it’s due for a mini-makeover, but will continue to stir the pot of commercial kitchens across the city.

…AND lovin’ it. Opposition Leader Jeremy Hanson is clearly a glutton for punishment. After four hours sleep in freezing temperatures with nothing more than a beanie, three sheets of cardboard and a mug of soup to show for it, he thanks his Vinnies CEO Sleepout supporters for their donated dosh and, in his monthly newsletter, finishes with the masochistic flourish: “I look forward to taking part again next year”. Really? 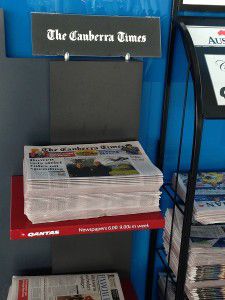 FREE papers, which CC imagines couldn’t possibly be used to bolster the foundering circulation numbers of “The Canberra Times”, are readily available at the Canberra Airport concourse. “The Oz” and the “Fin Review” are also free, too.

If you spot other examples of paid-newspaper largesse, please alert us at confidential@citynews.com.au

“GLAD to see that CC cares about correct spelling,” purrs reader Jennifer Evans, alluding to last week’s item “Where’s Zed?”, before giving us a deserved smack in the chops.

“Interesting to see your dining reviewer in the same issue writing, we ‘were immediately served a welcome pot of tea (complimentary), which we enjoyed while pouring over the extensive menu’,” she says.

“The student diners mentioned were equally sloppy, ‘pouring over textbooks while slurping soup’.”

AS a “valued guest” of Virgin, CC was invited to take part in a 15-minute internet survey about a recent flight. Poised to wax lyrical, we moved to the first screen and when asked to select a calling, the word “journalist” sent us down the laundry chute to a frosty screen saying the airline was interested in valued guests with a different background.

So we went back in, told a porkie and did the survey with a response that would turn them pink with pride.

Keeping up with the girls 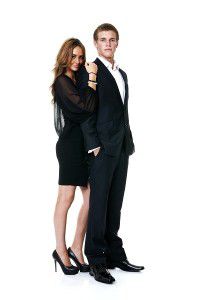 APPARENTLY, there are women out there who shamefully have been “banned from wearing high heels by their partners” – at least this is what we’re told by the promoters of footwear brand Taller.

The makers of “shoes that make men taller” say women love high heels, but that wearing them can make their partners seem shorter.

Not to worry. Taller combats this “growing frustration” with shoes that have a hidden height increase of between 6cm-10cm.

“Banned” women have a clear choice: dispose of the vertically-challenged man in your life, or check out taller.com.au

In store, then online

IT’S confirmed… according to a nationwide poll, shoppers are increasingly treating physical stores as a dress rehearsal for their online purchases.

They try on clothes for size and suitability before buying them online, ask for the price on goods to be matched to what they can buy them for on the internet and quiz salespeople for information to use for an online purchase.

Of those polled, 65 per cent agreed that if service was better in physical stores they would shop in them more often. Long queues at the checkout or register were by far the biggest complaint with 43 per cent of those surveyed regularly experiencing this issue and a further 45 per cent, occasionally.

The poll, for a Sydney-based public relations consultancy, surveyed 1221 Australians, aged between 18 and 64, of which nine in 10 had shopped online.

CityNews - July 15, 2020
0
The letters confirm the worst fears of those who viewed Governor-General Sir John Kerr’s sacking of the Whitlam government as a constitutional coup, writes CHRIS WALLACE.