NEWLY-gonged property developer and Canberra arts czar John Hindmarsh got the biggest laugh of the morning by prefacing his speech to the large gathering at the ACT Order of Australia Association’s Oz Day breakfast at the Yarralumla Yacht Club that “The Canberra Times” had afforded him the fastest promotion through the ranks, having carelessly labelled him in the Big Moment clipping as John Hindmarsh AO, instead of the lesser, but equally lovely post-nominal, AM.

Spelling that makes you go hmmm

1. INVITATION to join the Egyptian ambassador for his National Day knees-up lists the embassy’s address as 1 Darwin Avenue, “Yarralumia”.

3. In a Canberra Centenary hand-out photo caption from the presentation of Centenary medallions to centenarians at Regatta Point, Chief Minister Katy Gallagher was described as “Katie”. Easy mistake, but she does pay their salaries!

4. Continuing our collection of collective nouns: a trip of goats, a glint of goldfish and a bloat of hippopotamuses.

WORLDS are colliding… while CC bemoans the unforgivable early retail presence of Easter eggs and hot-cross buns, Christmas is still in the air 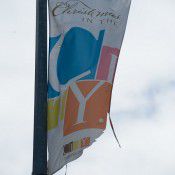 around Civic. How so? While the city’s power poles are mostly festooned with woo-hoo Centenary banners, there is still a veritable multitude of flapping flags around London Circuit, Vernon Circle, Braddon, up Northbourne Avenue, down Constitution Avenue and through City West heralding the long-since thrill of “Christmas in the City”.

WITH Palace Cinema’s opening bringing increased attention to the Nishi Building in NewActon, CC wondered what’s with the Japanese name? Certainly, the architecture is said to reflect a Japanese ethos, but the word nishi has two meanings: for the public, it means the direction west (city west, get it?) and tenants might prefer the Buddhist term, that refers to life after death – paradise.

KAMBAH’S Incredible Orange Peeling Bridge, as if by magic, is being repainted. CC tragics will recall that last week we exposed the wanting paint  job in the suburb’s new (pre-October election) golden gateway that dramatically spans busy Drakeford Drive. 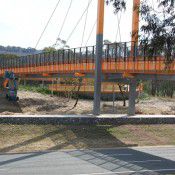 Now there’s a cherry picker on the job and the central, previously blistering and peeling giant pier has been rubbed back to its grey undercoat clearly with the promise of post-election permanent new coat of paint.

CAPITOL Chilled Foods managing director Garry Sykes may be in the market for some more coloured suits following his company’s trumpeted return to local flavoured-milk production with new flavours including Milk Choc and Choc-Malt Honey. Sykes rather famously had three suits tailored in Asia in white, pink and lime to match the company’s flavour range. Brown and honey?

KINGSTON business gets a note in the letterbox to pick up a registered envelope. Call to Australia Post to ask why the postie didn’t just deliver it, the doors were open. Oh, no, ma’am, says the clerk on the line, postmen are not permitted to get off their bikes. That’s right. Which leads CC to wonder the point of registered envelope deliveries that can be delivered only if the recipient happens to be standing beside the letterbox when the bike-bound myrmidon passes by.

ONE excited Canberra Raiders fan tweeted this happy snap with the Red Hot Chilli Peppers’ Flea, during the Peppers’ tour of Australia. “Hung out with Flea from Red Hot Chili Peppers t’day gave him a Canberra Raiders jersey he loved it,” the tweetee brags. Whether he’s on board with the Green Machine or not, perennially bare-chested Flea looks happy enough to have been given a shirt, at the very least. 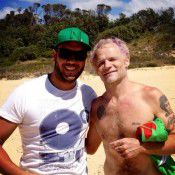 CityNews - July 14, 2020
0
A boat was set alight in Higgins on Sunday (July 12) in what police suspect was an Outlaw Motorcycle Gang (OMCG) related incident.