HERE’S a way of bringing the bad taste of the Skywhale down from the clouds and straight to your head. 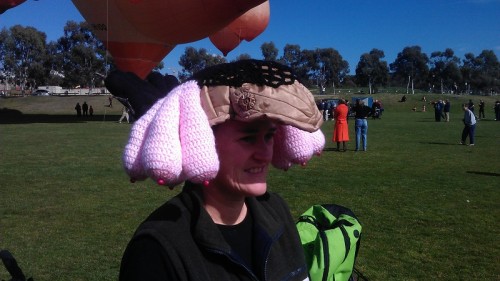 Our CC roving snapper at the UC Open Day caught this shameless fan of the ugliest air balloon in the world modelling her homemade knitted and sewn Skywhale hat replete with pendulous woolly breasts and attached red nipples.

CC never misses the letterboxed “Brodtmann Bulletin”, relishing the opportunity to count the number of photos the member for Canberra can fit in of herself. She has excelled in the latest edition – 13 pictures of Gai in four pages.

AND also hot from the hustings, local Palmer United Party Senate candidate Wayne Slattery (whose day job is CEO of the Good Samaritans) gives his Greens opponent a serve in an uncharitable, press-release rant.

First he calls the boyish Simon Sheikh “Simone” then he says Sheikh has no real connection to the Canberra community unlike himself, that is before misspelling Dickson as in: “Recently, the Palmer United Party provided a free sausage sizzle for over 120 homeless people and locals in Dixon.”

“LOOK at the fun you have with the ladies at Woden View Club” had us panting to see the pictorial attachment and, yes, they do seem to be having a jolly time.

We’re certain the similarly dressed Margaret Gooch, national councillor for AA, and club president Jan Roberts (right) were laughing with a po-faced Liberal MLA Giulia Jones and not at her.

More fun at the next club lunch at the Southern Cross Club, Woden, on Tuesday, September 24 with a fashion parade lunch in aid of the Smith Family. Call ‘em at 6286 1827.

“YEAH, I’m not having much luck,” bemoans reader Paige Wilson, who sent us a four-exclamation-mark missive relating the sad tale of how her second car this year, a three-month-old Kia parked on Henderson Road, Queanbeyan, was whacked by an elusive small truck around 1pm on Friday, August 23, that departed the scene pronto.

“My back tyre was completely punctured and my back passenger door will not open,” poor Paige laments. “My car is brand new. I had to purchase it after my last car was written off in April (I wasn’t at fault then, either!).”

In the absence of the other driver’s details, she’s up for the insurance excess. She lives in hope at paigey_book@hotmail.com

OUR heads hurt trying work out why, but the Canberra Griffins Dragon Boat Club members have painted 20 garden gnomes – “pint-sized versions of themselves” – and plan to row them (and their miniature dragon boat) across Lake Burley Griffin to Rotary’s Gnome Knoll at Floriade on September 14.

“It’s been a massive team effort by the club to build the boat as well as paint each individual gnome in the Griffins’ colours,” says club president Joe Murphy. “Luckily they’re better paddlers than they are artists!”

The club is currently recruiting anyone taller than a gnome with a “come and try” day, 10am-noon, on Sunday, September 15. More info at canberragriffins.com.au.

He was at a launch of a school arts project of 80 works inspired by the tower itself from five local schools that cater specifically for children with special needs.

Robert Macklin - July 14, 2020
0
"For all their self-congratulation, the members of the so-called National Cabinet had failed to see and heed the obvious lessons from a near neighbour. No, not NZ," writes "Gadfly" columnist ROBERT MACKLIN.