A PEACEFUL spot among shady eucalypts, Janet and Andy Russell’s native Aranda garden is also a treat for anyone passing by.

“It’s a wildflower garden, a bit like an English meadow but with Australian natives,” says Janet.

“We wanted the sloping front area to be a sort of layered amphitheatre, which shows off the plants as people go by. The terraces and swales also slow the flow of water, so it’s attractive and functional.” 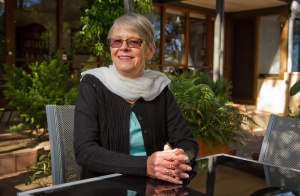 The garden, full of grasses, herbs, lilies, strappy plants, pink and purple flowering shrubs, annuals and perennials, will be open to the public on the weekend of October 26-27.

There’s always something in flower, says Janet, and with her love of all varieties of daisies, bursts of yellow and orange scatter the garden.

“The paper daisies seem to last for ages, until they’re well past the flowering stage,” she says.

The Russells moved in to the house in 2000, but didn’t tackle the garden for about a year. 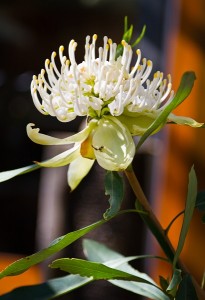 “We decided to try doing exclusively natives, so we removed a lot of the vegetation,” she says. “Of course, when you do that the birds don’t revisit, so it’s taken a while to bring them back. We also have skinks and blue-tongued lizards that visit regularly.”

Experienced native gardeners Janet and Andy are active in the Southern Tablelands Ecosystems Park, which has a forest at the National Arboretum.

“Andy has long had an interest in Australian natives and landcare, and we’ve applied sustainability techniques to our own garden, like ensuring optimum placement of plants and only watering on our dripper system if the plants need it,” she says.

“Many of our plants self-seed, but we’ve found they need to be quite well-established for that to happen.”

There’s a winding path that leads to a tranquil courtyard under a pergola draped with white-flowering wonga wonga vine.

“We eat lunch out here every day, and I love the dappled sunlight,” says Janet. “It reminds me of a Monet painting, and the view over the trees to the Brindabellas is just lovely.”

The Russell’s open garden has been cancelled for the weekend of October 26/27. An alternative date may be provided in due course. 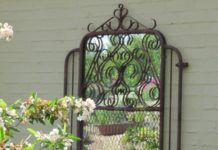 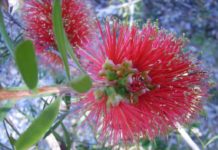