LOCATED on the edge of the O’Connor Ridge nature reserve, David and Lainie Shorthouse have created a garden that’s productive year-round and a beautiful place to be.

The house is surrounded by an ornamental grapevine that cools the couple’s home in summer and lets in light in winter, and is the first example of their aim to “tread lightly on the planet”. 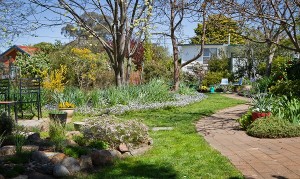 The 1800sqm garden on Dryandra Street, Lyneham, will be open to the public for the first time as part of Open Gardens Australia on the weekend of October 12-13.

“We bought the house because of the size of the block – we wanted to be able to grow more of our own produce,” says David.

With seven chooks, a huge veggie patch growing peas, broad beans, potatoes, onions, tomatoes, rhubarb, asparagus, lettuce, carrots, beetroot, garlic and more, David says they’re pretty much self-sufficient for half the year, as they freeze, bottle and preserve what they can for leaner times.

There is also a productive orchard, with apricots, peaches, plums, apple, kiwi fruit and nectarines, and a separate area for berries.

“We’ve been trying specialist food plants like saffron, goji berries, pomegranate and blueberries, with mixed success,” says David cheerfully. “It’s bitsy, but a lot of fun, and we like to give everything a try.”

The front garden is largely natives, with winding paths and beds of exotic and native shrubs, grasses and groundcovers creating a palette of contrasting colours, textures and forms. 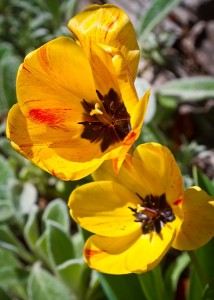 It’s also a very lush, peaceful space, where kangaroos wander over from the reserve and a variety of birdlife come to play – and sometimes help themselves to blossom, wisteria flowers and fruit.

“The garden was pretty bare when we moved in 30 years ago, and we’ve never had any help, except for the kids – it’s just the two of us and it does take a lot of time,” says David.

“We’re a bit like farmers; we can’t go away at certain times of the year because we have to be here to work on the garden.

“But gardening has been a lifelong love for us both. And if you love it, it’s great.”

Lainie says they generally cook and eat what’s in season in the garden.

“We enjoy having a knowledge and understanding of where our food comes from,” she says.

“Planting, harvesting and preserving are skills that are often lost in the community, but I find gardening very therapeutic; you don’t think about anything other than what you’re doing.”

The garden at 266 Dryandra Street, Lyneham, will be open on Saturday, October 12 and Sunday, October 13, 10am-4pm. Adults $7, children under 18 are free. Funds raised will go to the Open Garden Scheme and Quaker Service Australia. There will be teas and plants for sale. More information at opengarden.org.au.