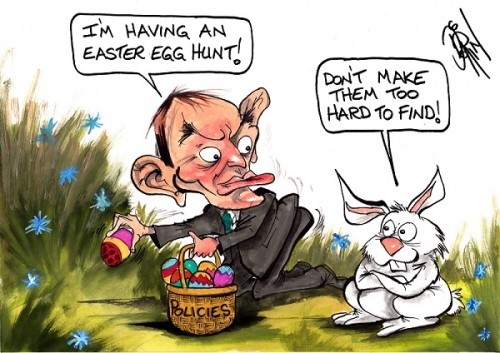 Despite being among the safest seats in the country, the reality is that voters in the ACT believe they are voting for Prime Minister Julia Gillard or Opposition Leader Tony Abbott.

At the moment, it is a similar story in the Senate – although the ructions over the Liberal Party preselection just might make them a little more vulnerable to a challenge from the Greens.

The trouble is that this sort of campaigning is based on spin. What started as spin has eventually become the “big lie”. This is the sort of propaganda that comes back to bite the hand that feeds it.

We do not have a president. We have a Prime Minister. Even the words spell out the truth: “prime” is an adjective meaning the first, of most importance.

Traditionally, the Prime Minister is described as the first amongst equals. It is not surprising that Labor in Victoria is describing newly elected Premier Denis Napthine as illegitimate because he “knifed” former Premier Ted Baillieu. They are simply playing the same card that the Liberals use on Gillard.

We do not have a presidential system of government, but rather vote for our local member who, in turn, helps to choose the Prime Minister. However, the lie has been repeated so often that it has in effect become reality. How many people believe they have a choice at the September 14 Federal election between Gillard and Abbott?

The reality is that this “lie” is so pervasive that even Kevin Rudd came to believe that he had been directly elected, Presidential style, by the people and the elected members should have no say in whether he should remain.

Ironically, many of those now baying for Gillard’s blood and Rudd’s return to the top spot are the same people who argued that the original replacement was illegitimate because he had been “elected by the people”.

In Australia, as in other developed countries, oppositions have realised that being negative and attacking the person is much more effective than just attacking policies. And the mainstream media is guilty of playing a significant role. Negativity sells more papers, brings more audience to the television news and gets more talkback comment. And negativity works best for oppositions.

It should be no surprise then that the destructiveness is largely focused on the personality rather than the policies of the incumbent. Comments are common on what Julia wears, the size and shape of her bottom, her haircut, whether or not she tells the truth and so on. She is painted as quite an unpleasant personality. A few years ago, when she was in opposition, I had the pleasure of sitting next to her for an evening through a dinner.My own perspective is that she is a delightful conversationalist, a highly intelligent person and is really committed to Labor ideals. None of this ever seems to come through in a media with a preference for running sensational negative stories.

The presidential style leader of the Liberal Party is not subjected to the same level of negativity from the Government. Well, not yet! The focus of the Government is rightly on governing the country. The focus will change as we get closer to the election and certainly if Abbott becomes Prime Minister. Already, there are accusations about his attitude to women and women’s rights. Expect to hear further discussion on the size of his ears, the conservative nature of his clothes – although this seems less significant in men than women – his over-the-top obsessive-compulsiveness with cycling, swimming, fitness and religious ardour and his persistent pretence of being “the man” in his fluoro shirts and hard hats.

Our Westminster system has now become so heavily based on personality politics maybe it’s time to change our constitution, adopt a republic and elect a real president.