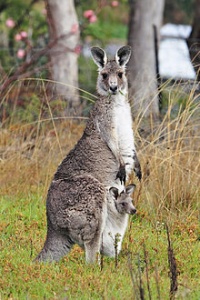 The cull had been given the green light after a decision handed down by the ACT Civil and Administrative Tribunal on Wednesday, ruling that 1244 kangaroos could be shot at seven sites by the end of July.

“We are elated that the pressure bought to bear by repeated forays onto the reserve has meant many adult kangaroos and joeys have been protected,” Ms Drew says.

“Activists will be out on the ground tonight at every reserve and will continue this pressure to protect kangaroos from a gruesome and unjustifiable death until the end of the culling season on 1 August.”

Speaking on ABC Radio yesterday, ACT Municipal Services Minister Shane Rattenbury confirmed “minor adjustments” had been made due to the presence of activists across the seven sites.

“There have been protesters on site,” he said.

“I believe some warnings have been issued, but I’m not aware of any major incidents at this point.”

Protesters caught trespassing in closed reserves could be fined up to $5500 under the Nature Conservation Act.