KNITTERS from around Australia gathered in Garema Place this afternoon, sporting knitted banners and a message of political protest. 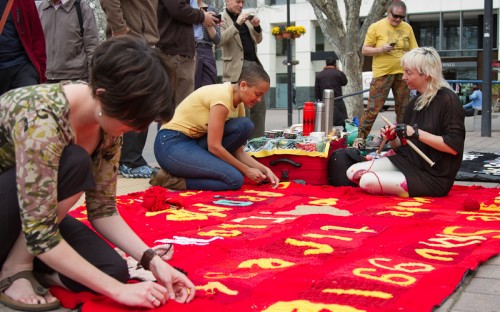 The “Knit Your Revolt!” project brings together Canberra alternative knitting group The Crooked Stitchers with Melbourne crafting group Craft Cartel, as they tour the nation with the aim of political protest in the form of knitting and crocheting.

The tour accompanies two large knitted banners, designed by one hundred knitters among eighteen craft groups across Australia, including The Crooked Stitchers.

Project organiser Casey Jenkins says the project began as a response to the media’s reaction to Julia Gillard knitting.

“Several media commentators described Gillard’s decision to be photographed knitting as a contradiction to her ‘tough’ image”, says Jenkins.

“The only reason they view knitting as weak is because it’s associated with women and that’s how they view women. But after we started to put out the word that we wanted to make some banners, we had knitters across Australia wanting to be involved.”

One of the banners addresses the issue of asylum seekers, reading: “Budgie smugglers: more threat to Australia than people smugglers”.

A member of Canberra group The Crooked Stitchers, Alice Snow, believes that the knitting can act as a powerful way of communicating political opinions.

“Too often, I think things that are perceived as women’s craft and women’s business is not seen as powerful. And yet, it actually has affected quite a lot of change in politics over the decades. This is us keeping that tradition strong, in our own sweet way”, says Snow.

“There are a lot of very passionate knitters out there, and politicians would do well not to underestimate us”.

The second banner contains a knitted caricature of a big-eared Tony Abbott, with the attached statement: “Misogynistic knit-wit: not PM material”.

Jenkins commented on the banner, and said that she believes that knitting is one of the most effective ways of making a political comment.

“The medium of knitting is ideal for campaigning against misogyny, because knitting and craft are commonly associated with women, and by association, they’re often patronised as lesser art forms. People perceive it as being warm, cuddly, inoffensive and benign, and so it’s really quite a neat way to slip a political message in”, says Jenkins. “We want to show how tough and determined knitters and women really are!”

The ‘Knit Your Revolt!’ tour has already visited Melbourne, Perth, Hobart and Geelong, and will head to Brisbane next, before stopping off in Tony Abbott’s electorate of Warringah on election day, where the project will continue to offer free tea, biscuits, knitting lessons, and “nanna-core wisdom”.

CityNews - April 15, 2021
0
Canberra remains the most expensive state or territory to rent a house or unit and tenants are finding it harder to secure a lease, according to the Domain Rent Report for the March quarter.