IT’S a year of big birthday bashes and not just Canberra’s Centenary. Some businesses are toasting many years in the nation’s capital, including La Scala, which is celebrating its silver anniversary (25 years) with the same family at the helm.

Many memories have been made. Many high-profile Canberrans have dined at La Scala… prime ministers, ambassadors, dignitaries and more. The security guards have hung around discreetly, well as discreetly as they can, with their pristine-pressed suits and coils from their ear pieces dangling like long, fancy earrings. 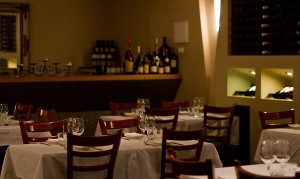 Many gatherings have been held in the “private” dining rooms – no doubt what goes on at La Scala, stays at La Scala.

What is the secret recipe given that many restaurants cannot stay open past a few years? What mix of ingredients makes La Scala – named after the famous, opulent Opera House of Milan – a stayer?

Atmosphere is one ingredient. La Scala’s décor is warm and comforting; it wraps around you tightly like an Italian nonna giving you a massive hug.

The classic dishes created from recipes steeped in history are another part of the secret recipe. Four of us settled into one of La Scala’s dining rooms, complete with glorious wine racks, a small bar and fireplace. Then the feast began.

Love the depth of gorgonzola? Then order the risotto balls with pork ragu, fennel seeds, bocconcini cheese and a creamy, rich, absolutely decadent gorgonzola sauce (entrée $16.80). It is a moment on the lips and lifetime on the hips, but did we care? No we did not!

Can’t go past pasta? We shared three, each with their own personality. The spaghetti was light and clean – fresh seafood in seafood stock with gremolata, garlic and a nice hit of chilli ($26.80). My next favourite was the tiger prawn pappardelle. The prawns were sautéed and flamed with gin in a cream and Fontina cheese reduction ($28.80). While I adore saffron – the most expensive spice in the world – the saffron and poppy seed tortelloni was heavy for me, although the sundried tomatoes, pesto, cream and brandy combo was intriguing ($22.80).

We all went “yum” with the warm caponata salad created with roasted pine nuts and an aged Balsamic and apple reduction. It accompanied a thick and juicy piece of pork loin ($27.80).

The piece de resistance was the rich and very velvety white Belgian chocolate panna cotta. It sat beautifully in a ring of golden brown espresso coffee and Tia Maria reduction and was an OMG dessert.

La Scala’s wine list is extensive and impressive. And at La Scala it is attentive service with amore. For decades this multiple award-winning restaurant has been serving customers under the watchful eye of brothers Gab and Enrico Saccardo. It does so with utter confidence.