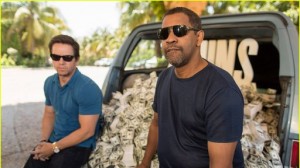 ICELANDIC director Baltazar Kormakur does a top job staging this action comedy with a screenplay derived from graphic novels.

The plot puts two good guys together on the trail of a big stack of dollars stashed away in a bank that needs robbing. How they came to join forces is never explained. What neither knows at the outset is that the other is an undercover good guy.

DEA operative Bobby (Denzel Washington) has been three years building a case against Mexican drug baron Papi (Edward James Olmos). Stig (Mark Wahlberg) is reporting to Lt Quince at the Corpus Cristi Naval Aviation base. Earl (Bill Paxton) represents CIA interests. These agencies don’t talk to each other. Films of this kind usually have a girl with loyalties often not what we expect, which is why we expect that to be the case. Deb (Paula Patton) adds decoration as a DEA field agent.

The comic chemistry between Bobby and Stig is one of the main structural members carrying “2 Guns”. The wickedness of Papi and his underlings is another. Shooting, car-wrecking, punch-ups, explosions, whackings with baseball bats, Russian roulette and angry bulls add to the mix. Mindless, but good fun.

At Dendy, Limelight and Hoyts

CityNews - August 7, 2020
2
The ACT Greens have slammed Planning Minister Mick Gentleman, saying they're outraged that he used call in powers to override the development application for Common Ground Dickson.