QUEANBEYAN High School was a sea of purple today, as the entire school community turned out to help one of their own, a student in the special education unit called Kira, whose home, clothes, toys and even her six-week-old puppy, were wiped out in a house fire between Terms 1 and 2 this year.

Purple, it turns out, is Kira’s favourite colour, as her fellow students found when they asked her how she would like to theme the event, which they have designated “Purple Mufti” day.

The brains behind the whole enterprise is year nine student, 14-year-old Shelbie Catania, who single-handedly galvanised the school into action, talked the year eight science class into baking purple-iced cupcakes, and persuaded the entire staff, including those working in the office, to take up the “purple mufti” challenge.

Maths teacher Michael Guilfoyle, who advises the Student Representative Council, made sure there was a year 11 student on hand to to assist Shelbie. 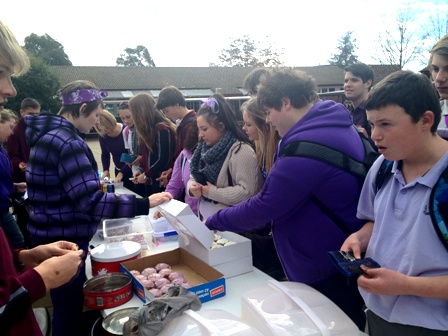 According to Guilfoyle, the entire school community chipped in by paying a couple of dollars to attend assembly this morning, raising $750. The recess and lunchtime cupcake sales, he expected, would bring in a few hundred dollars more to help Kira settle in to her family home, which is being repaired and restored right now.

Later it was revealed that Purple Mufti Day raised $1425 in total.

In the devastating fire that wiped out everything she owned, Kira also lost a stuffed ostrich that she was very fond of. The Queanbeyan High students, shocked by her loss, trawled the internet to find one.

“They got it to her immediately,” Guilfoyle said, “I’m just so proud of these kids.”

By chance, Shelbie was obliged to be away from school today, but speaking for her was her year 11 mentor, Ty Phelps, who told “CityNews” that he initially put his hand up to help her with announcements and public speaking.

“I can say she’s been the boss, though,” he said this morning over a purple cupcake, “Shelbie came up with the idea, and she assigned all the jobs.” He believes that after this experience she will also be confident enough to take on the public speaking too.

In Ty’s view, the recent shakeup of the school’s SRC that has thrown its membership open to the wider school populace has seen many shy or marginalised students taking an active part in the fundraising, working bees, food drive and other activities of the past year.

“This SRC is so different,” he said, “students used to feel like their opinions didn’t matter but now everyone’s ideas get accepted—it’s just awesome.”

The students took time out from their cupcake selling to tell “CityNews” that the money will be given to Kira’s mother for replacing some of the toys and personal effects that were lost, “something for her.”

And no, they wouldn’t buy her a new puppy—the good news is that she already has one.

CityNews - May 21, 2020
0
SINCE March police have been investigating a series of commercial thefts from ACT and NSW including farms, ACT Parks and Conservation depots and ACT Rural Fire Service depots/stations.