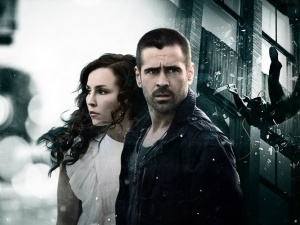 In its opening inter-gang battle, Viktor (Colin Farrell) shines as one of a criminal group led by Alphonse (Terrence Howard) angry about discovering one of his team in a freezer.

Viktor lives alone in a high-rise apartment. Across the airshaft, he sees a handsome young woman, Beatrice (Noomi Rapace) living with her French mother (Isabelle Huppert).

Beatrice’s face bears scars from a car accident and she wants Viktor to terminate the other driver whose sentence for drink driving was, in her opinion, far too lenient.

Viktor too harbours unresolved issues about the people who murdered his wife and child to complete emptying a building scheduled for demolition.

Rapace played Lisbeth Salander in Oplev’s Swedish version of “The Girl With The Dragon Tattoo”. His treatment of J H Wyman’s adaptation of his own novel combines measured respect for the material with enthusiasm for depicting its emotional and physical elements.

In a couple of memorable if possibly excessive battles for criminal power, pace and energy are acceptable apologies for funky marksmanship on both sides.