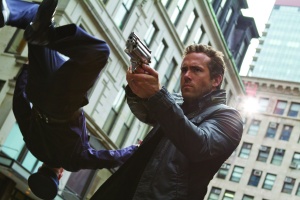 HOW to persuade an undiscerning public to provide you with a living. Begin with an episode in a network TV series. Get some geeks to turn the concept into a video game. And inflate the result into a big-screen movie.

Writers Phil Hay and Matt Manfredi postulate a branch of the Boston Police Department to which cops killed in the line of duty are assigned to the task of ridding the after-world of really bad guys.

This is a different notion from the traditional heaven where good guys rest In peace and hell where bad guys suffer eternal discomfort. Any film varying a concept that has, for better or worse, guided the moral and spiritual values of mainstream Europe for nearly two millennia deserves a look, however glancing.

There’s little novelty in Robert Schwentke’s fantasy actioner. When Nick (Ryan Reynolds) arrives at RIPD office after having been murdered by colleague Hayes (Kevin Bacon), the Proctor (Mary-Louise Parker) teams him with Roy (Jeff Bridges) who for nearly two centuries has brought a tradition of rough and ready Western justice to the work.

From there, “R.I.P.D.” is pure vanilla fantasy with modern visual graphics embellishing a quite straightforward crime action plot with familiar screens full of destruction, road rage, punch ups, grotesque villains and shootouts leading to a conclusion that will surprise nobody.