WHEN the front end titles for a movie proclaim its provenance from an American comic book (in reality, neither comical nor book), you intuitively know that it’ll offer a relaxing dose of violence, excitement, destruction of property and improbable deeds of derring-do as good and bad guys battle it out. 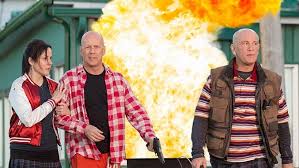 Such movies serve a useful purpose, exposing us to formulae requiring little brain energy, an invitation to sit back and enjoy, needing no recollection of its predecessor (to which in true comic book style, most movies in that genre devolve). And so it is with Dean Parisot’s rendition of a screenplay by the Hoeber brothers who wrote that predecessor.

I enjoyed “Red 2”, for its mad improbabilities, its clever action and humour, and the return of Frank’s crew. My favourite memory from the original “Red” is of Victoria (Helen Mirren) having fun with a machine gun. She and John Malkovich are back to help.

It’s therapy for tired minds, mindless fun watching the good guys win, as you would expect.