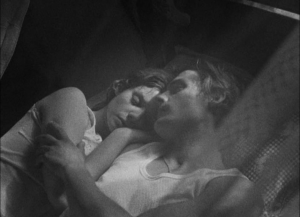 TO get best value from Portuguese filmmaker Miguel Gomez’s “Tabu”, a love story in a prologue and two parts told in reverse order in contemporary Lisbon and the Portuguese colony in Africa 50 years earlier, leaving expectations at home will help.

In the prologue a traveller burdened with emotional baggage chooses a crocodile as a suicide mode. In Lisbon, Part 1 introduces Aurora, whose fey attitude to life proclaims her as a few sandwiches short of a picnic. After losing all her funds at the casino she calls her neighbour Pilar to collect her. In the final week of Aurora’s life, Gian from her past enters the film.

Traveller, Aurora and crocodile form a conjunction in Part 2, stylistically nostalgically-filmed and dramatically more-energetic. Young Aurora was quite a gal, owner of a tea plantation, a keen big-game huntress, wife to a playboy with pop musician aspirations before music learned to rock. And pregnant. Which is no barrier to a full-on affair with Gian.

The story unfolds without complications. What sets the film apart is the style in which Gomez has staged and filmed it. The black-and-white cinematography is lovely. Part 2 unfolds without dialogue – narration guides us through what visual clues don’t explain. A subtle visual subtext comments about the difference between colonised and colonists.