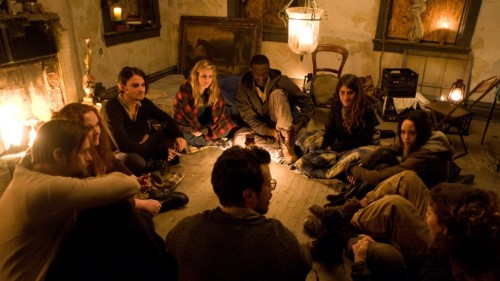 THIS film, about urban terrorists preparing to deliver uncompromising retribution to large-scale polluters, is the creation of Brit Marling who, with director Zal Batmanglij, co-wrote the screenplay.

In 2009, the pair reportedly spent time among an anarchist collective researching how it worked. The fruits of their study hit the screen with an impressive sense of authenticity.

Marling plays Sarah, a field agent employed by a private intelligence company headed by Sharon (Patricia Clarkson) whose clientele is wealthy corporations. Sharon sends Sarah under deep cover into an anarchic group calling itself The East.

“The East” travels into the same kind of issue country as did “Erin Brokovich” but observes its narrative from a totally different viewpoint. The group intends to deliver reprisal by punishing top executives of polluting companies. Sarah finds herself between the rock of the group’s destructive ethos and the hard place of its moral stance. And despite leaving a well-loved partner in her Washington apartment, she finds herself increasingly drawn to one of the group’s leaders.

The film sometimes strains credulity tighter than comfortable. But its tensions are strong, its issues are valid and its unfolding of conflict and retribution is powerful. Inviting us to choose between competing interests, it reminds us that neither side can claim exclusive right to the high moral ground. Its resolution of that dilemma unfolds during the closing credits. Don’t leave early.