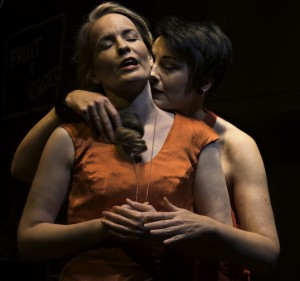 SANDRA France’s new chamber opera “From a Black Sky”, with libretto by Helen Nourse, presents an ordinary marriage break-down against a backdrop of devastating fires and a secret lesbian tryst.

What begins as light operetta blossoms, by act two, into full-blooded opera seria. In her dramatic tale of love and betrayal, Sandra France reveals a mature and unified palette of orchestral colours, unashamedly lyrical but never succumbing to popular devices.

These diabolical musical devices, echoed visually by fire and smoke, are contrasted by recurring bird song – a motif perhaps symbolising hope just as Messiaen used birdsong to herald the end of suffering. Indeed, France’s opera presents the passage from darkness into light, beginning with the first hints of the coming inferno and ending in the dawn of a new day.

From act one, throughout the opera, radio transmissions document the worsening crisis. Soprano Rachel Duncan (Amelia) brought grace and elegance to the opening of act one, and maintained strong performances throughout.

The first act culminated with the image of a secret lesbian affair unfolding inside a house surrounded by fire – an extended duet between Duncan and Dodsworth.

Act two was some of the strongest opera writing I have heard from an Australian composer. Echoes of Stravinsky’s “Rite” eclipsed by a cacophonous and spectacular climax. Clashing corrugated iron and tutti orchestra signalled the arrival of the fire front – a sustained roar that overpowered the audience and seemed to draw smoke and flames from the ceiling (assisted by red fluorescent lights).

This act was dominated by wonderful writing for mezzo and tenor roles. Perhaps the strongest image of the opera was that of Rogers-Smith giving an absolutely sublime performance while standing in a burning house, surrounded by flames. Accompanied by Faustian arpeggios and diabolical strings, Dodsworth is diabolically vengeful, shaming David (Rogers-Smith) into remaining in the house where he will die. Rogers-Smith is simply breathtaking in his response – his bel canto tenor voice unsupported but for haunting slides in the strings.

Through the ashes, first light appears and France’s opera ended to tumultuous applause. Those of us who’ve been around Canberra music circles for a while couldn’t help but smile to see percussionist Gary France in the orchestra looking so very proud of his composer wife – and who could blame him? We’re all a little proud of her.